This winter anonymous commenters on a philosophy blog wanted to ridicule a ‘liberal’ professor. In order to do this, they wrote about how he had sexually harassed me while I was a grad student under his power. They included details of what had happened. They identified the professor. And they identified me.

The discussion on this forum spawned its own dedicated thread. It lasted for several months and received many thousands of page views. They debated about whether I was lying, or whether I was so brainwashed that I couldn’t speak out about my experiences. They floated the idea that I was doing it for attention (what “it” was, I’m still not sure), or whether I was happy to have been harassed since they thought it furthered my political aims. They attacked people I care about, calling them hypocrites (and much worse) for not supporting me – when those people have done nothing but support and empower me. They considered “saving” me by encouraging me to tell my story, assuming I hadn’t already spoken about it and thought carefully about when and how I continue to do so. To be clear: this was not helpful or empowering. It was a form of revictimization, further taking away power I’d already lost. It positioned me as an object and made me acutely aware of my vulnerability within the profession. It erased the difficult work I’d already done to respond to and navigate this situation, and it used my life and experiences as a tool to prove some point their forum aimed at. It took more than 63 days for someone to raise the possibility of speaking to me, of treating me as an epistemic agent capable of speaking and acting for herself. This comment received few responses and no one followed up on it. Eventually, their attention moved elsewhere.

It would be not easy, but simpler, if people could simply decide to ignore the blogs or to opt out of online interactions. But social media and the philosophy blogosphere play pervasive roles within our profession and staying away carries real drawbacks. Official work is done in these spaces – conferences are organized, paper drafts are circulated, policies are worked out. Self-care work occurs here: in a job market that can scatter people across the globe, this is a way to continue friendships, pursue co-authorships, and foster support networks. Much of the importance of online interactions comes from its status as a venue of what Rebecca Kukla and I term ‘peripheral speech’ – the informal, unofficial speech that is not the central work of the profession yet plays a constitutive role in crafting the fabric of the community. The conversations that occur on social media and in the philosophy blogosphere are typically not the official work of the profession, yet they set the agenda for what people are talking about within the profession. These online interactions are where we focus attention to particular issues, try out new ideas, and develop research agendas. These kinds of exchanges are where many of us find joy in philosophy – where we can be playful with it or use philosophy to better understand unfolding social issues. It’s part of what makes philosophy fun and, especially, worthwhile. Opting out of these interactions doesn’t just come with some professional drawbacks or increased social isolation; it also blocks people out of the informal yet vital life of the profession.

This is also what makes online misogyny so powerful. Because so much of the work of our profession occurs in these online spaces, misogyny here can play a powerful role within the profession at large.

Kate Manne has defined misogyny as the system of oppression that keeps women from challenging male dominance. Online misogyny exists in many forms and these forms permeate our profession. Sometimes this system of misogyny is overt: it occurs at the level of semantics, in the content of the comments, and the stated purpose of the actions. Women, non-binary philosophers, and trans philosophers receive rape threats and death threats and have their personal information disclosed online. Targeted campaigns are organized online, calling for students to protest their courses, for administrators to censure or fire them. These are similar to and sometimes entwined with the campaigns organized against philosophers of color; the systems of white supremacy and misogyny are structurally connected. The point is to intimidate, to compel the target to silence. Even when these campaigns don’t erupt in a high-profile way, they can still succeed in subtle ways: their targets are often aware that something is brewing, and they devote considerable time and energy getting responses in place and friends, colleagues, and university officials up to speed on the situation. This is yet another kind of invisible and unrecognized labor. If targets of these campaigns don’t do this, and the campaign erupts, then they both suffer the consequences of the harassment and are perceived as ‘unprepared’ in their professional capacity. If they do prepare, and nothing happens, then they risk being seen as ‘hysterical’ or as overly concerned, again undermining their professional status. If the point is to quiet dissent to male dominance, to put women and gender minorities ‘in their place,’ these campaigns at least partially succeed regardless of if they receive national attention or not.

But online misogyny plays a yet more pervasive role within our discipline. Mansplaining (granting women and gender minorities unjustly low credibility attributions and endlessly explaining things they know to them), gaslighting (denying that any wrongdoing or injustice has occurred in the face of a person’s clear experience of it), and spokespersoning (taking members of underrepresented groups to speak for the group as a whole) are some of the more well-known forms this can take. By treating women and gender minorities – especially those who are multiply vulnerable – as incompetent epistemic agents when the main work of our profession is epistemic work, these tactics not only oppress their targets but cast them as deficient in their professional capacity.

Perhaps less well known are the ways that the pragmatics of the interactions themselves can reinforce misogyny. Here, misogyny exists in the normative structure of the interaction rather than in the content of what is said. To name just a few examples (which I examine in detail elsewhere):

These sorts of interactions variously position women and gender minorities as incompetent epistemic agents, drain their epistemic resources, position them to speak for all other members of the group, and demand their attention in order to ‘prove’ their commitments and credentials. Intentionally or not, the pragmatic upshot is to manipulate the epistemic agency and subject positioning of their targets.

The anonymous philosophy blogs bring together these various levels of misogyny. They utilize both the threat of a media storm and the pragmatic structure of the comments to maintain a system of power within the profession. Sometimes the comments are explicitly misogynist: they denigrate women, non-binary folks, and trans folks. They debase their targets and call for “naming and shaming” philosophers from underrepresented groups who they don’t think have “earned” their successes. In choosing to out me as a survivor, while at the same time calling me a liar and characterizing themselves as my saviors, they multiply positioned me as powerless. All of these strategies draw on a system of power that works to maintain the status of privileged men. They position their targets as incompetent epistemic agents, and by extension incompetent philosophers.

They utilize the threat of a national media attention to make their targets attend to the blogs. It’s dangerous to entirely ignore them. More, it calls for intentionally being attentive to views that dehumanize women and gender minorities. In order to protect oneself, readers seek out the blogs and take on the status of being amongst the blogs’ audience.

These blogs utilize the pragmatic effects of anonymity to have an outsized impact on the profession. While anonymity online can serve an important function – to protect vulnerable people as they speak out about their own experiences – here anonymity serves a different function. Yes, it prevents the commenters from being held responsible for their actions. But it also means that the rest of the profession doesn’t know who is saying these things, who holds and is promoting these views. Anonymity here means that every conversation might be reported back to the blogs, every interlocutor might secretly hold their views. These blogs utilize the pragmatics of anonymity to position their forum as peripheral speech of the profession – and since their identities are unknown and at least a few of them are thought to be proper philosophers, it’s structurally difficult to discredit or unseat them.

While these blogs are particularly vile, they don’t happen in a vacuum. They’re only able to utilize peripheral speech because misogyny is present – though in varying forms – in everyday interactions within the profession. The anonymous blogs are only able to utilize anonymity in the way they do because so many of us have seen trusted friends and colleagues draw on the structure of misogyny in their interactions with us; if misogyny in daily interactions was entirely unknown, then the anonymous commenters could be more easily dismissed as outsiders to the profession.

If we want to make things better, one place to start is to dismantle misogyny in everyday online interactions.

In the meantime, these feminist cybersecurity resources offer support and guidance for navigating online harassment: 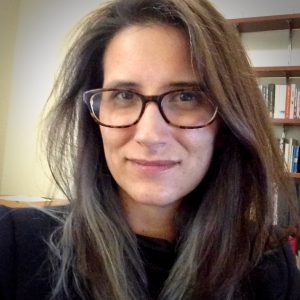 Cassie Herbert is an Assistant Professor at Illinois State University. She works on social philosophy and philosophy of language. She especially focuses on the pragmatics of slurs and the ways we use language to construct ingroups and outgroups. In her spare time, Cassie boxes and makes unnecessarily intricate crafts.

Philosophy in the Contemporary World: Bisexuality and the Culture of Professional...

Diversity and Inclusiveness May 31, 2017