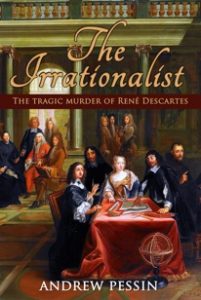 Who knew philosophy could be deadly?

But it can, apparently, according to Connecticut College philosopher Andrew Pessin’s highly original new novel based closely on real events: the sad life and very mysterious death of the famous 17th-century philosopher, René Descartes. Set against the backdrop of Europe’s devastating Thirty Years War, the novel is part biography, part history, and very much a page-turning murder mystery. It tells the heartbreaking story of one of humankind’s greatest thinkers, “a man who could do a half-dozen calculations in his head simultaneously but could not master how to navigate a world filled with actual human beings.” It’s whipsmart, funny, heartstring-tugging, and features one of those shocking endings that make you go right back to the beginning to start re-reading.

A brief description of the plot:

Who (you might be asking) would want to murder the world’s most famous philosopher?

It turns out: nearly everyone.

In 1649, Descartes was invited by the Queen of Sweden to become her Court Philosopher. Though he was the world’s leading philosopher and mathematician, his life had fallen apart. (How? Why? I can’t say without including spoilers.) He was 53, penniless, living in exile in Amsterdam, alone. With great trepidation but not much choice, Descartes arrived in Stockholm in mid-October.

Shortly thereafter he was dead.

Pneumonia, it was said. But who believed that? There were too many “persons of interest” who wanted to see Descartes gone, for too many reasons. That so many of these persons were in Stockholm—thanks to the Gala the Queen was throwing to celebrate the end of the terrible Thirty Years War—made the official story even less plausible. “Death by poisoning” was the unofficial word on the cobblestone.

Enter Adrien Baillet, a likeable misfit with a mysterious backstory (and whose name was borrowed from Descartes’ real-life first biographer). He arrives just as the French Ambassador desperately needs an impartial Frenchman to prove that Descartes died of natural causes, lest the “murder” of France’s great Catholic philosopher, in Lutheran Sweden, trigger colicky French boy-King Louis XIV to reignite that awful War. Baillet reluctantly agrees to investigate Descartes’ death, knowing that if—or when—he screws up, he could be personally responsible for the War’s Thirty-First Year.

Solving the mystery of Descartes’ death, Baillet soon learns, requires first solving the mystery of Descartes’ life, with all its dangerous secrets. None of it is easy; nearly everyone is a suspect; no one can be trusted. Nor does it help Baillet that he must do it all under the gaze of Carolus Zolindius, the terrifying Swedish Chancellor with the strangely menacing limp.

But Baillet perseveres, surprising everyone as he solves the mystery, all the way to the shocking end—the one that will make you go right back to the beginning.

There are numerous gripping real characters, from the newly powerful (and notoriously sexually ambiguous) Swedish Queen Christina to her ruthless chancellors, from famous scholars and clerics (several of whom are suspects) to the unpleasant members of Descartes’ family. And many of the gripping events are real, too, from the dreadful episodes of the Thirty Years War to the finer points of Descartes’ biography. Among these is a scene described by Descartes in a letter from August 1638, set in a small garden outside Amsterdam on a beautiful summer’s day:

The famous philosopher was thinking about the transmission of sound when he accidentally dropped a clay pot on a stone. To his surprise—and to that of a little girl who also happened to be in the garden with her parents—the shattering sound reverberated back from an overgrown corner of the garden, at a slightly higher pitch. The little girl ran off to that corner as if to find what had shattered there. Finding nothing, she ran back toward him, expectantly. “I then clapped,” Descartes wrote in the letter, “and the sound came back from that same spot, a sharp retort but elevated in tone as if the cry of a bird.” The giggling little girl ran off to find the mysterious hidden bird in the overgrown spot and giggled even harder when, once again, there was nothing there to be found. Descartes clapped again and the girl cried, “Come back, echo, come back!” and ran off to look once more, and again, and again.

The philosopher who could not navigate among other human beings, who sat in gardens thinking deep thoughts about the science of sound, playing the echo game with a little girl; levity and gravity at the same time. This dichotomy defines The Irrationalist, as you are exposed along the way to Descartes’ controversial thought wrapped into a very human context. And then (not quite a spoiler alert) when you discover the importance of this touching scene in the garden in particular, where these deep thoughts about sound mix with the child’s giggling delight, your heart breaks. And soon after you will start re-reading from the beginning, with a whole new understanding of what you are reading.

It’s really two novels for the price of one.

Pessin, who teaches philosophy at Connecticut College, has put together an intriguing new way to be drawn into the world of philosophy.

Andrew Postman is a freelance writer based in Brooklyn, philosophy enthusiast, and author of more than a dozen books, including the novel Now I Know Everything.

About Which Philosophers Should Films Be Made?

Discussion: Which Works of Philosophical Fiction Are On Your Summer Reading...