The Impossible Demands of Morality

In an ‘Author Meets Critics’ session at the APA’s 2017 Central Division Meeting, author Lisa Tessman of Binghamton University met with critics Nomy Arpaly, Nicolas Comell, and Eric Wiland to discuss her book Moral Failure: On the Impossible Demands of Morality. 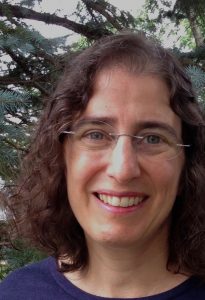 Lisa, for those who couldn’t make it to your Author Meets Critic session at Central APA, can you give an overview of your book?

My book, Moral Failure: On the Impossible Demands of Morality, is about situations in which moral failure is inevitable. Most commonly, these situations arise because of a conflict between two moral requirements; if you can’t fulfill both, and neither requirement is “negotiable,” then even the requirement that’s overridden in your decision about what to do will remain in effect, and you’ll simply fail to fulfill it. But moral failure can also be inevitable in cases where a moral demand arises out of another person’s needs, if those needs are inexhaustible and thus impossible to meet. Of course, to characterize the demands of morality as impossible to meet, I have to reject “ought implies can,” so much of the book is a reconsideration of “ought implies can.”

We sometimes experience ourselves as morally required to do something impossible. So the question is, what’s the status of this experience? I draw on empirical moral psychology—pointing to evidence that our judgments are often made through an automatic, intuitive process rather than through a conscious reasoning process—to explain how we might arrive at the judgment that we’re required to do something despite being unable to do it. We don’t reason our way to this judgment; it’s an automatic judgment, an immediate feeling of “I must.” But just because we may intuitively judge ourselves to be impossibly required to do something, does that mean that we’re “really” required to do it? To answer this question, I consider constructivist accounts of what morality is, and what sort of a process of construction yields authoritative moral judgments. I differ from other constructivists in what I take that process to be like, because most constructivists adopt something like reflective equilibrium as the appropriate process for sorting through our initial evaluative judgments, and coming up with a set that we can endorse and imbue with authority. I don’t think that this is the only route to constructing moral requirements that we treat as carrying authority. In particular, a value that we tend to treat as “sacred”—such as the value of someone we love—can be undermined if we subject it to the sort of critical questioning that takes place when we weigh it rationally against other values. This presents a problem: we need to critically question the values that we’ve sacralized, because they can go (terribly) wrong, but we risk “thinking the unthinkable” if we consider sacrificing sacred values in the course of this critical questioning. So sometimes critical questioning is prohibited, and trusting our judgments about being impossibly required—and imbuing these judgments with authority—is what enables us to avoid thinking the unthinkable.

I believe that impossible moral requirements, and inevitable moral failure, make moral life quite difficult. That difficulty takes a variety of shapes, and the middle part of the book explores this in different contexts: there’s a chapter on Holocaust testimony and on how survivors’ reports of the failures of morality have tended to be met with denial; another chapter looks at how both ideal theory and non-idealizing theories of oppression have avoided acknowledging the inevitability of certain moral failures. The last part of the book treats the question of moral demandingness, looking at theories of supererogation (which minimize the demands of morality), and then at feminist care ethics (which may portray morality as moderate through a specifically feminist version of the “demandingness objection.”) There I argue that my view of impossible moral requirements implies that moral life is extremely difficult, not that it’s extremely demanding in an action-guiding way. 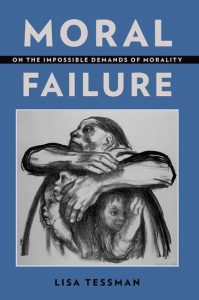 What do you think is the most important aspect of your book?

Some reviewers and other readers of the book have described the book as dark, grim, pessimistic or tragic. One of my critics in this session called it the “gloomiest philosophy book ever” and made it clear that she could hardly bear reading and discussing it! I sometimes found thinking and writing about the topic to be pretty unbearable too. It is a grim book. But I hope that revealing some of the most anguishing aspects of moral life is also important and compelling. I’ve tried to capture some of the worst implications of the failures of morality, and the worst of what impossible moral demands can do to us. I think that sometimes human needs and vulnerabilities are so enormous and so outstrip anyone’s capacity to respond, and that there’s so much potential for conflict among the various things that we value, and furthermore that we may live our moral lives under such serious adversity or injustice, that no moral system can tell us how to avoid moral failure. Instead, we have to live with it.

What do you think were the most challenging points that the critics raised in the session?

I really appreciated all three of my critics’ comments, and I learned a lot from each of them. Nicolas Cornell made the very interesting point that the notion of unthinkability is both underinclusive and overinclusive. I responded in agreement, but perhaps for some different reasons than those that Cornell had in mind. I think that our intuitive judgments of unthinkability don’t always line up with what we should say are “really” non-negotiably prohibited actions because our judgments of unthinkability are only part of the raw materials that enter into the process of socially constructing the wrongness of an act. Because our intuitive judgments—including those about what is and isn’t unthinkable or about which values are sacred—can go wrong, they can’t be all that go into this process, and sometimes we might decide, for instance, that we’ve failed to treat a non-negotiably prohibited action (such as sacrificing the life of a distant stranger) as unthinkable just because of the way our intuitions function.

Nomy Arpaly raised several important challenges to the book. The one that was most interesting to me went something like this: in many cases, a person will feel that she has failed morally even though what she failed at was an impossible task; however, none of the people around her will judge her to have failed morally. In other words, it is from the first person perspective that we tend to judge ourselves to be required to do the impossible, while from the third person perspective we don’t take people to be impossibly obligated. So Arpaly asked: why should we endorse the first person perspective on this matter? I don’t have space here to explain my whole reply to this challenge, but it concluded with the following thought. Part of what we want from other people is that they have certain emotionally based responses to us, including the affect-laden intuitive judgment that there are things it would be unthinkable to do to us. Rather than take the Kantian line that what we must do, morally, is treat other people with respect, which implies that there are things that it would be wrong to do to them (such as using them merely as a means to our own ends), I’m saying something stronger: we must also treat other people as beings whom it would be not just wrong, but also unthinkable, to violate in particular ways (despite the fact that it’s not always possible to avoid such violations). And treating them like this requires having a certain emotional response to them. If so, then the perspective from which this response is evoked—that is, the first person perspective of someone who is in the particular kind of situation that evokes this response—is a perspective that must be treated as authoritative. If the affect-laden intuitive judgment—that one is impossibly required to do something because the alternative would be unthinkable—doesn’t tend to be made from the third person perspective, then restricting ourselves to this perspective means we will lose out on this valuable way of responding to other people.

Eric Wiland’s comments pushed me to think more about what I mean by an inconsistency (between the judgment that “ought implies can” and the judgment that I’m impossibly required) and delved much deeper into the concept of inconsistency than I myself do in the book, where my claim is that the two judgments can’t be held in reflective equilibrium. His argument involved a fantastic tour through Alice in Wonderland that was a lot of fun. 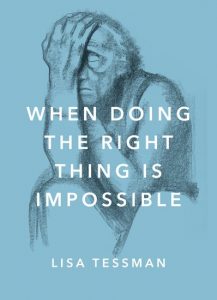 What I did immediately after finishing the book was not exactly further research on the topic, but it was further work on the topic: I was frustrated by the fact that the book—and most of what professional philosophers write—is aimed at an audience of other philosophers. I vowed to start writing for a more general audience. So I did exactly that. I wrote a new book that expresses many of the same ideas that I developed in Moral Failure (plus some new material) but that is meant to be read by people with little or no background in philosophy, and it’s full of concrete examples. The new book is called When Doing the Right Thing Is Impossible and it’s forthcoming from Oxford University Press in July 2017.

Lisa Tessman is Professor of Philosophy at Binghamton University. She is the author of Burdened Virtues: Virtue Ethics for Liberatory Struggles (OUP 2005), Moral Failure: On the Impossible Demands of Morality (OUP 2015), and When Doing the Right Thing is Impossible (OUP forthcoming 2017).

Speaking Pro Re Publica in Ancient Rome and Today (Part 2)