William Irwin met with critics of his book at APA Central and here he reflects on the session.

Bill, congratulations on your book! For those who couldn’t make it to your Author Meets Critics session at Central APA, can you give an overview of your book and the session? 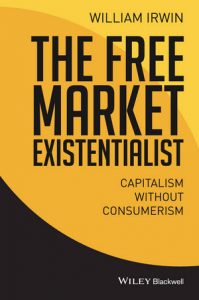 What do you think is the most important or compelling aspect of your book?

Others have previously argued that Jean-Paul Sartre’s existentialism was not a good fit with his Marxism. My book argues that not only does the existentialist emphasis on individual freedom and responsibility fit well with free market economics but that existentialism actually helps the individual to deal with capitalism’s potential pitfalls, namely alienation and consumerism.

What intrigues you most about existentialism?

In the book I define existentialism as a philosophy that reacts to an apparently absurd or meaningless world by urging the individual to overcome alienation, oppression, and despair through freedom and self-creation in order to become a genuine person. So what I love about existentialism is that it is a philosophy of life and a philosophy of personal empowerment. It speaks to the downtrodden and offers hope in the midst of despair.

The panelists all read the book very carefully and offered insightful criticisms. Most of the criticism focused on my moral anti-realism, my argument that although there are moral feelings there are no moral facts. I draw on the work of Richard Joyce, Sharon Street, Joel Marks, and Richard Garner in making my argument. In addition to worries about the viability of moral anti-realism, two particular criticisms were raised: First, that I continue to use moral language in my argument, and second, that moral anti-realism seems out of place or unnecessary in the book. In response, I pointed out how morally saturated our language is. As biologists who reject teleology nonetheless find it difficult to avoid teleological language, so too does the moral anti-realist find it difficult to avoid moral language. I understand that some readers may find the moral anti-realism out of place, but it is my meta-ethical position and I don’t think I could omit it.

What was your take on the discussions with the audience?  What topics were raised, and what are your reflections on them?

I was pleased that although most members of the audience had not read the book, they could still follow the discussion and they made excellent comments. Following up on comments from one of the panelists (Skye), an audience member suggested that the political system I describe need not be an all-or-nothing package and could be implemented incrementally. I conceded that this certainly makes sense and clarified that I was dealing in ideal theory. My ideal political scenario would be what Chandran Kukathas calls a “liberal archipelago” in which the minimal state I envision would be offered as a choice among liberal states that share in common the right to exit. The panelists and audience members were too polite to use the word naive, but in essence my vision was criticized for being just that. Along similar lines, an audience member referenced Berman’s The Politics of Authenticity, expressing the concern that it’s hard for wage slaves to be authentic. In response to this and related comments, I pointed out that lots of experiments appear naive when proposed. Just think of the naive idea that we don’t need a king to rule us.

One of the audience members helpfully drew my attention to the connections I might make to pragmatism, naturalism, and early American philosophers like Thoreau and Emerson.

As an author, I found it helpful to realize that the book was just the start of a conversation. As they say, it’s never finished, only published. The critics in my session were all highly professional and courteous, supplying me with drafts of their comments in advance of the session.

What are you working on now?

I have a new book in the works titled God Is a Question, Not an Answer, which grew out of a blog piece by the same title that I published in The Stone for The New York Times.

I have dramatized the philosophy of The Free Market Existentialist in a novel entitled Free Dakota, which explores what happens when libertarians from all over the country move to North Dakota and attempt to secede. Maybe the realm of fiction is where my philosophy belongs!

You Can’t Force It: Doug Anderson on American Philosophy