Research Technological vs. Social Progress: Why the Disconnect?
Research

Technological vs. Social Progress: Why the Disconnect?

As swiftly as fantastic technologies are coming—robots! space colonies! super-humans!—intellectual and social progress seems to be flat-lining. It’s an election year in the US, after all, and the big mouths are striking again. But it’s not just this year; ignorance is increasingly held up as a virtue since the 2008 elections, if not earlier. Idiocy’s been having a great decade.

And this is weird, right? You’d think that technological and social progress would go hand in hand, but they don’t appear to be. As a technology ethicist and a political philosopher, I was asked to offer a few off-the-cuff thoughts on the matter:

1. Technology might be a social bandage at best and a crutch at worst. Insofar as technology seeks to solve social problems—human problems—it can’t do much to enlighten us. Technology itself doesn’t make us better people; that’s not work we can pawn off to anyone (or anything) else.

For instance, modern cars may be safer than ever, saving thousands of lives in accidents; but they do nothing to discourage drunk driving. If anything, safer cars means that we can take more chances, since we’re more likely to survive accidents. Today, algorithms that make decisions for us mean we’re outsourcing that intellectual labor, risking the loss of deliberative skills, including moral reasoning. Those are exactly the skills we need for social progress.

Sure, Facebook and other technologies connect us in new ways, which would seem to build the kind of community needed for social progress. Yet they also magnify the echo chambers we like to hide away in, and they can bring out the worst of us. Online anonymity is the story of King Gyges and his ring of invisibility. And many other new social problems are created, including real lives lost to cyberbullying and real costs incurred for cybersecurity.

2. Because it’s built on a technological foundation, modern society overprivileges empirical knowledge. Many seem to believe that engineering is real, while ethics is just opinions, and opinions don’t matter much. As a result, we see an emphasis on STEM (science, technology, engineering, and mathematics) education from primary schools to most universities. But non-empirical matters, such as ethics, continue to be difficult to teach and are often neglected, despite lip service to the arts and humanities.

When ethics and political discussions happen these days, some hateful positions are verboten, but they are far from gone. They’re only driven underground, and some politicians today are summoning those demons back. Technology can’t seem to free us from the vicious cycle foretold by Plato, where democracies can be tipped over into tyrannies.

But sunlight is the best disinfectant. John Stuart Mill would tell us not to ignore these festering wounds but actively attend to them. Of course, it’s easy to prescribe tolerance but difficult to practice it, as we’re finding out. Tolerating all opinions is a test of tolerance itself.

3. More than tolerance, wisdom is difficult to sustain. We’re having to re-learn lost lessons—sometimes terrible lessons— from the past, and intergenerational memory is short. “History does not repeat itself, but it rhymes,” as Mark Twain (might have) said.

In physics, the law of entropy tells us that thermal energy tends to dissipate; it takes work to keep it together, focused and useful. Maybe there’s a law of intellectual entropy: does wisdom tend to dissipate over time too? Ignorance is much more stable than knowledge or wisdom. You don’t need to do anything to maintain ignorance, while it takes a lot of work to continue knowledge. 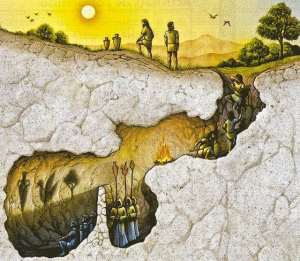 As Plato’s Allegory of the Cave suggests, education can be painful and is often revolutionary. Few people like to be told they’re wrong, so most folks need to be dragged, kicking and screaming, into the light. This doesn’t make for a sustainable equilibrium. Meanwhile, science and technology live effortlessly in our artifacts, and so technical knowledge persists over time more easily. New discoveries are built upon previous ones, automatically cementing what has already been learned.

4. Technological progress doesn’t depend on a majority consensus, for the most part. All it takes is one person, a team of inventors, or a company to develop and field a technology; and then people will use it or not. The technological progress we may see in our society isn’t so much a reflection of deliberate policy, just the uncoordinated actions of large numbers of individuals.

Of course, this oversimplifies how technologies are adopted, which could have a political dimension, especially for infrastructure and regulated markets; but the point is that it is much harder to galvanize the masses to support socially progressive programs. In a democracy, you need that coordinated push for meaningful change, and you can count on roadblocks thrown up by opposition groups every step of the way. With technology, any backlash often comes well after the fact, after the technology has momentum in the marketplace and only after some egregious event or effect has occurred, beyond mere philosophical objections.

5. Whatever the reasons for the schism between technological and social progress, it doesn’t seem to be new. Several generations ago, Martin Luther King Jr. remarked, “Our scientific power has outrun our spiritual power.We have guided missiles and misguided men.” Further back in time, some Ancient Greek heroes—such as Icarus, who flew too close to the sun—revealed the tensions between technology and wisdom.

Back to the present, we’re still wondering why we’re alone in the universe, if we are. Statistically, the universe should be teeming with alien species, but where are they? This is known as Fermi’s Paradox. One version of the “Great Filter” answer to the question is that all intelligent life eventually destroys itself once it reaches a certain level of technological power. If this is our destiny, then it also suggests an inverse relationship between technology and wisdom, and maybe that divergence has started. 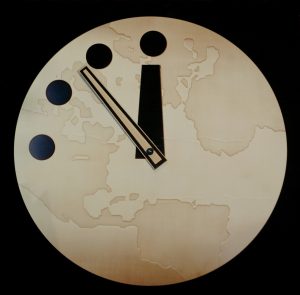 This might not sound so crazy, if you consider nuclear weapons and other emerging technologies. Though we’ve reduced global stockpiles of nukes from 70,000+ at the peak of the Cold War to about 10,000 now, the Doomsday Clock—how close we are to the end of the world as we know it—is still set to three minutes until midnight.

These are only initial observations, and I haven’t looked at all the wonderful social progress we’ve been making. It’s possible that the disconnect between technological and social progress is overstated. But it’s also forgivable to think that, if we are making social progress, we’re taking two steps forward and one or more steps back. In contrast, technology advances much more evenly, if not exponentially.

With apologies to Plato, we are our own Guardians.  We’re the ones who make or break our own society. That means a moral education is critical for all of us—an essential safeguard against abuse of power, technological or otherwise. Perhaps we are destined to re-learn this lesson over and over, with each generation, until the clock strikes midnight.

Patrick Lin, Ph.D., is the director of the Ethics + Emerging Sciences Group, based at California Polytechnic State University, San Luis Obispo, where he’s an associate philosophy professor. His other current and previous appointments at: Stanford Law School’s Center for Internet and Society, Stanford’s School of Engineering, University of Notre Dame, US Naval Academy, Dartmouth College, New America Foundation, and Australia’s Centre for Applied Philosophy and Public Ethics (CAPPE). Dr. Lin has published extensively in technology ethics, especially on robotics, cybersecurity, human enhancements, nanotechnology, and more. He has delivered briefings and invited talks to government, military, industry, and academia, including: United Nations, US Department of Defense, CIA, US National Institutes of Health, US National Academies of Science, Google, Apple, Tesla, Nissan, Bosch, Daimler Benz, Harvard, US Air Force Academy, and many others. He was a recipient of the APA’s 2015 Public Philosophy Op-Ed Contest.

What Are You Reading…On Featured Books at the Central APA, Part...

What Are You Reading…On Thinking Globally