Research Teaching About the Existence of God
Research

Teaching About the Existence of God

Relatively few philosophers specialize in the philosophy of religion, but many teach an introductory problems course in which one usual topic is the existence of God. The routine approach is to present and assess the three traditional arguments for the existence of God, then shift to the problem of evil, after which the unit on God’s existence ends.

My new book Religion Within Reason (Columbia University Press) suggests that this approach often takes place within a set of misleading assumptions that nonetheless may be shared by students and faculty members. One of these assumptions is that if God’s existence were disproved, then religious commitment would have been shown to be unreasonable. Various religions, however, reject the notion of a supernatural God. These include Jainism, Theravada Buddhism, Mimamsa and Samkhya Hinduism, as well as “death of God” versions of Christianity and Reconstructionist Judaism.

Here, for example, is how Rabbi Mordecai M. Kaplan, an opponent of supernaturalism, responds to a skeptic who asks why, if the Bible isn’t taken literally, Jews should nevertheless observe the Sabbath: “We observe the Sabbath not so much because of the account of its origin in Genesis, as because of the role it has come to play in the spiritual life of our People and of mankind…The Sabbath day sanctifies our life by what it contributes to making us truly human and helping us transcend those instincts and passions that are part of our heritage from the sub-human.“

Consider, for instance, one of the major figures in the Christian “Death of God” movement, the Anglican Bishop of Woolwich John A. T. Robinson, who denies the existence of a God “up there,” or “out there.” Here is his account of the Holy Communion: “ [T]oo often…it ceases to be the holy meal, and becomes a religious service in which we turn our backs on the common and the community and in individualistic devotion go to ‘make our communion with God out there.’ This is the essence of the religious perversion, when worship becomes a realm into which to withdraw from the world to ‘be with God’—even if it is only to receive strength to go back into it. In this case the entire realm of the non-religious (in other words ‘life’) is relegated to the profane.”

Of course, a naturalistic religion can also be developed without deriving it from a supernatural religion. Consider, for example, the outlook of philosopher Charles Frankel, another opponent  of supernaturalism, who nevertheless believes that religion, shorn of irrationality, can make a distinctive contribution to human life, providing deliverance from vanity, triumph over meanness, and endurance in the face of tragedy. As he puts it, “it seems to me not impossible that a religion could draw the genuine and passionate adherence of its members while it claimed nothing more than to be poetry in which [people] might participate and from which they might draw strength and light.“

Such naturalistic options are philosophically respectable. Whether to choose any of them is for each person to decide.

Teachers and students should also recognize that theism does not imply religious commitment. After all, even if someone believes that one or more of the proofs for God’s existence is sound, the question remains whether to join a religion and, if so, which one. The proofs contain not a clue as to which religion, if any, is favored by God. Indeed, God may oppose all religious activity. Perhaps God does not wish to be prayed to, worshipped, or adored, and might even reward those who shun such activities.

Yet another misleading assumption is implicit in the definitions which are usually offered: a theist believes in God, an atheist disbelieves in God, and an agnostic neither believes or disbelieves in God. Notice that the only hypothesis being considered is the existence of God as traditionally conceived; no other supernatural alternatives are taken seriously. But why not?

Suppose, for example, the world is the scene of a struggle between God and the Demon. Both are powerful, but neither is omnipotent. When events go well, God’s benevolence is ascendant; when events go badly, the Demon’s malevolence is ascendant. Is this doctrine, historically associated with Zoroastrianism and Manichaeism, unnecessarily complex and therefore to be rejected? No, for even though in one sense it is more complex than monotheism, because it involves two supernatural beings rather than one, in another sense it is simpler, because it leaves no aspect of the world beyond human understanding. After all, theism faces the problem of evil, while dualistic hypotheses have no difficulty accounting for both good and evil.

I am not suggesting, of course, that the proofs for the existence of God or the problem of evil not be taught. I am urging, however, that all  participants be alerted to the limited implications of that discussion. 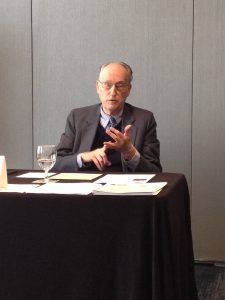 Steven M. Cahn is Professor Emeritus of Philosophy at the City University of New York Graduate Center. Among his recent books are The World of Philosophy, Exploring Philosophy of Religion, and (with Christine Vitrano) Happiness and Goodness: Philosophical Reflections on Living Well.

What Are You Reading…On Music