When I mention to fellow conference participants in various philosophy circles that I work on Zora Neale Hurston, I often get a polite smile and questioning eyes. Some may remember her from a distant course in English, perhaps, or maybe even her being mentioned by a colleague in African American Studies. Similar to Zora’s absence from the canon of African American literature (until Alice Walker’s famous rediscovery in the 1970s), I felt her absence in the contemporary fields of race and gender in philosophy. While W. E. B. Du Bois, Alain Locke, and Richard Wright have wriggled their way into the discipline of philosophy via the subfields of critical philosophy of race, Africana philosophy, and African American philosophy, their black Southern feminist counterpoint, Zora, was hardly to be found, despite the volume of her thought devoted, in critical response, to their conceptions of black life (our problems, our politics, and our agency) or her deep love of Plato and Spinoza. Her erasure was in large part due to her racial politics that ran so counter to the program of her day that she was intellectually booted. Branded “conservative.” Barred from discussions of more “tenable” positions concerning racial matters.

Back in 1886, Anna Julia Cooper, in her “Womanhood a Vital Element in the Regeneration and Progress of a Race,” noted that the failure to grasp the complexity of Southern black women’s political agency is, like the heart and heel of young Achilles, a “vulnerable point” in black political discourse. (A sentiment recently echoed in black feminist historian Cynthia Greenlee’s “Just Say No Thanks to #ThanksAlabama and ‘Magical Negro’ Narratives”.) Perhaps, as Cooper suggested way back then, we still ought to “pause a moment for retrospection, introspection, and prospection.” So that we can remember that there is a long lineage of black feminist thinkers who cut their political teeth in the South: Frances Ellen Watkins Harper, Anna Julia Cooper, Ida B. Wells, Ella Baker, Beverly Guy-Sheftall, bell hooks, Alice Walker, and Angela Davis, to name a few. Or that the Civil Rights Movement first found its footing among black women “down South” in Alabama. Or that, in our own philosophy circles, many of the black women and men in the profession, if not born and raised in the South, earned at least one of their degrees from an institution in the South. Either initially at historical black liberal arts colleges, such as Spelman, Morehouse, or Paine College. Or subsequently at Southern research institutions, such as the University of Memphis, Vanderbilt University, or Emory University. While such lists are dangerous because someone is always inevitably left out, I have done so here because, as Joy James argues, specificity matters in the maintenance of memory.

Another way to maintain memory is to emphasize and encourage those practices that work to instill it. So I’d like to shift focus to a somewhat “overlooked” Southern black feminist, Ida B. Wells, and the efforts of one Southern university to honor her legacy by striving to diversify the discipline of philosophy. Born a slave in Hollysprings, Mississippi, just a few months before the Emancipation Proclamation was issued, Wells became a formidable agent of social justice. She was one of the founders of the NAACP as well as a national leader in the women’s suffrage movement. And she spent her budding political years en route between Memphis (where she lived) and Nashville (where she studied at Fisk University). In fact, it was during one of her travels between the two Southern cities that she, over seventy years before Rosa Parks in defiance of segregation laws, refused to give up her seat This incident sparked Wells’ foray into journalism in order to shed light on the social injustices of racism and later blossomed into her (more well-known) anti-lynching campaign.

In 2007, a number of African American graduate students decided to honor Ida B. Wells’ legacy by holding an annual conference in her name at the University of Memphis. These graduate students were part of an organization called the Ida B. Wells Association, founded in 2002. Their commitment to mentor and recruit African American students as well as participate in scholarly philosophical dialogue about issues concerning African Americans reflected Wells’ own participation in a long-standing black Southern tradition of self-determination, or helping ourselves. Over the years, members of the Ida B. Wells Association have included leading black philosophy scholars such as Kathryn Sophia Belle (formerly Kathryn Gines, an original founding member), Donna-Dale Marcano, Anika Simpson, Tina Botts, Kristie Dotson, and Kris Sealey to up-and-coming scholars such as Camisha Russell, Corey L. Barnes, Clifton Granby, and John Torrey.

The first Ida B. Wells Conference was a large collaborative effort of graduate students, faculty, and staff (Cathy Wilhelm and Connie Diffee): with financial backing from (then vice) Provost Karen Weddle-West, organization by graduate students in the Ida B. Wells Association (Camisha Russell and Samaiyah Jones), and advisory support of leading black philosophers both in the department (Bill Lawson) and outside (Howard McGary). The conference program included: visits to classes of faculty members, a dinner with faculty members as well as individual meetings, a luncheon with the Ida B. Wells Association, an opening session with then-recent graduate Donna-Dale Marcano, a presentation by then-graduate student Camisha Russell, a meeting with the Graduate Student Advisor, presentations from promising undergraduate students, a keynote from leading scholar, Lucius Turner Outlaw, and, in true Memphis style, a reception with excellent food and great music. These activities not only nurtured a sense of community across a number of career positions (undergraduate students, graduate students, junior, associate, and full professors)— they also resulted in the recruitment of two of the four undergraduate panelists.

In Southern obeisance to tradition, the Ida B. Wells Conference celebrated its 10th conference in 2016, under the advising of faculty member Luvell Anderson and the organization of graduate student John Torrey. Though reduced to one day instead of the original two, the conference still sported a stellar keynote from Kristie Dotson and presentations from undergraduate and graduate students—one of whom, Corey Reed, joined the University of Memphis’ philosophy graduate program in 2017. The 11th Annual Ida B. Wells Conference was held last Friday with Melvin Rogers as the keynote. The next Ida B. Wells Conference will be held on April 5-6, 2019. In keeping with its founders, the mission of the current Ida B. Wells Association is to “promote discussion of philosophical issues arising from the African American experience and to provide a context in which to mentor undergraduates.” At a time when many in the discipline are reflecting upon what can be done to recruit and retain people of color, I offer traditions like these as a sliver of a solution. And I have delved into the origins of this particular tradition, black feminism in the South, to remind us that this region has political resources for these trying times. 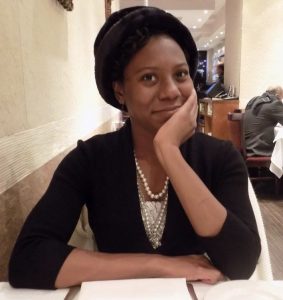 Lindsey Stewart joined the philosophy department at the University of Memphis in 2017. Previously, she was a Post Doctoral Mellon Fellow at Wellesley College. Her teaching and research interests are in black feminism, African American Philosophy, and social and political philosophy. Being a native Southerner (born and raised in Louisiana), her approach to research and teaching is particularly informed by an attentiveness to regional dynamics in the US. Her research focuses on developing black feminist conceptions of political agency, with special attention to the intersection of sexuality, region, religion, and class.

Filling the Gaps: Expanding the Canon in the History of Philosophy