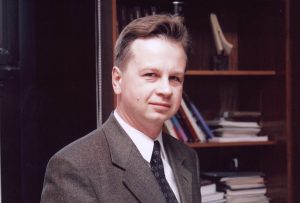 W. Julian Korab-Karpowicz is one of Poland’s most renowned philosophers and political thinkers. He is the author of Tractatus Politico-Philosophicus, a book that has been inspired, but at the same time critical of Wittgenstein’s Tractatus. He received his doctorate at the University of Oxford and is currently professor at Lazarski University in Warsaw and Zayed University in Dubai. He has written several books, including On the History of Political Philosophy: Great Political Thinkers from Thucydides to Locke (Pearson/Routledge 2012/2016), The Presocratics in the Thought of Martin Heidegger (Peter Lang 2017) and Tractatus Politico-Philosophicus: New Directions for the Future Development of Humankind (Routledge 2017).

What has made you to write your Tractatus? What is your book about?

My Tractatus Politico-Philosophicus (Political-Philosophical Treatise) is a work of political philosophy that aims to establish the principles of good governance and of a happy society, and to open up new directions for the future development of humankind. As the name itself suggests, it is also, in part, a response to the famous Tractatus Logico-Philosophicus of Ludwig Wittgenstein.

Have you been influenced by Wittgenstein?

I have adopted the form of Wittgenstein’s Tractatus, and in my Tractatus you will also find short, numbered paragraphs. However, my focus is primarily political philosophy and only a small part of my book, numbered seven and entitled “The Mystery of Existence,” is a direct response to Ludwig Wittgenstein, and specifically to the propositions included in sections 7, 1.1 and 6.4 and 6.54 of his Tractatus. To his famous statement 7, “What we cannot speak about we must pass over in silence,” I respond candidly, “We must speak about what we can no longer pass over in silence” (7). At the beginning of his Tractatus, Wittgenstein says in 1.1, “The world is the totality of facts, not of things.” I respond, “The world is the totality of values, rather than the totality of facts” (7.2021). My main critique of Wittgenstein is that in Tractatus Logico-Philosophicus, he reduces the world or reality to the totality of facts and disregards values by making them something merely subjective, and hence, contributes to positivism in social sciences, which is based on the distinction between facts and values. In 6.421 he says: “It is clear that ethics cannot be expressed [with sense].” Consequently, in the Wittgensteinian world, which is the totality of facts, statements about values, and particularly ethical statements, are claims based on mere personal preferences.

How do you rescue values from the subjective realm Wittgenstein condemns them to, and what definition of ‘value’ do you end up with?

In my Tractatus, values ​​are defined as the “qualities that human beings appreciate because of their ​usefulness or their role in the satisfaction of human needs” (2.555). If we agree with the positivists that values cannot be known by direct observation like physical phenomena, this does not mean that values cannot be known at all, or do not exist, or are merely subjective. Since in knowing the world, our subjectivity is always involved—or there is always a knower and what is to be known—facts are essentially subjective. There always subjectivity in objectivity! However, just as it is possible to communicate facts to others and agree on statements concerning them, because if we practice impartiality and neutrality, they can be made inter-subjective, and in this sense, also objective, so also it is possible to express values with sense, agree on them, and implement them in our lives. We can speak meaningfully and rationally about such qualities as cooperation, respect, goodness and love. Hence, rationality and meaningfulness are not merely limited to factuality. Further, only human beings can think and act in terms of values. They are the essential part of our human reality. To disregard them as lacking sense would impoverish reality itself, remove one of its important dimensions. We need to discuss them in order to engage in a meaningful and rational reflection on a good life.

Is our rational reflection on a good life relevant to the contemporary world?

Once we remove values from the domain of rational thinking, and thus, once we cannot speak with sense (meaningfully and objectively) about ethics and politics, we can no longer build any shared conception of a good life. This leads us to subjectivism and relativism; whose expressions are different competing ideologies, for which the foundation is political power rather than truth. In fact, the grave human tragedies that we have witnessed in the last hundred years, especially the Holocaust and many other cruel events that resulted in the destruction of entire cultures and nations, can be associated with a distinctive feature of modern and postmodern period in the history of the West, which is the presence of ideologies, from left- to right-wing, often hostile to one another. We still have not freed our minds from that ideological thinking. As I say in the Preface to my Tractatus: “It seems that in spite of the significant technological advancement that has occurred in the last hundred years, humanity has undergone an ideological enslavement and lost the ability to think independently and rationally about politics.”

What solutions to the current condition of humanity do you propose in your Tractatus?

In my Tractatus I attempt to prove that the world created by human beings is primarily a world of values, ​and that a rational and meaningful reflection on ethics and politics is possible. The book is divided into ten parts plus a conclusion. The first nine parts introduce systematically several topics. These are: Politics; Human Nature; The State; Freedom; Solidarity; Sophocracy (an ennobled democracy); The Mystery of Existence; Time, War and Change; and Power, Rationality and Rationalism in International Relations. Part 10 is a summary: Seven Principles of a Happy Society, and part 11, the conclusion, is Final Words. To describe this differently, my Tractatus is a complete system of ideas by which I try to replace the dominant system of today’s political ideas that I believe are largely destructive. The main objective of the book is to demonstrate the necessity of, and provide a guide for, the redirection of humanity. I argue that this paradigm shift must involve changing the character of social life and politics from competitive to cooperative, encouraging moral and intellectual virtues, providing foundations for happy societies, promoting peace among countries and building a strong international community. I believe that human reality, grounded on values, is principally self-created. The new politics, whose concept I introduce, is based on the awareness of our self-creative abilities and of human evolution. With the new politics, a new age of humanity begins. It is evolutionity—the evolutionary epoch that replaces modernity and postmodernity.

What are your final words?

The final words are again an allusion to Wittgenstein who, on the dedication page, quotes a motto that everything that can be known can be said in just three words. Yet he does not say what these words are. I propose: “life, freedom, and cooperation” and conclude with the statement: “The purpose of the evolution of life is its fullness and perfection. The evolution of life is a journey to ever greater freedom and moral perfection.” This is my message to humanity.

What do you plan to do next?

I have a few ideas for new books. My plans include writing a book in systematic philosophy, entitled Being and Value, in which I will challenge Heidegger’s ontology of Being and Time, and propose, like it was earlier attempted by Frederick Ferré, that our philosophical reflection on being cannot be separated from thinking about values.

You can ask Julian questions about her/his work in the comments section below. Comments must conform to our community guidelines and comment policy.

The purpose of the Recently Published Book Spotlight is to disseminate information about new scholarship to the field, explore the motivations for authors’ projects, and discuss the potential implications of the books. Our goal is to cover research from a broad array of philosophical areas and perspectives, reflecting the variety of work being done by APA members. If you have a suggestion for the series, please contact us here.

What Are You Reading…On Post-Aristotelian Philosophy

What Are You Reading…On Identity and Violence

What Are You Reading…On the Genesis of Economics