Philosophy as Love of Wisdom and in the Public Sphere

Some years ago, the economic downturn inspired me to put aside my business endeavors and return to school to study philosophy. I had loved philosophy for as long as I can remember, before I even knew what to call it, and later as I understood it in its broadest sense: the love and pursuit of wisdom. Wisdom was pursued through asking questions about everything, from the metaphysical and theological sort of questions that my religious and argumentative family used to debate around the dinner table and family gatherings (I credit these discussions and arguments, more than anything, with inspiring my philosophical curiosity) to all other questions about what’s true and false, just and unjust, good and bad, right and wrong. Wisdom was found through reading and learning as much as possible, then applying this learning to carefully thinking through possible answers to these questions. And wisdom was loved not because it brought understanding and meaning to life, but rather because its pursuit seemed beautiful to me.

Because my love of philosophy was formed prior to any introduction as a school of thought and my formal education was rather piecemeal, my approach was whimsical, idiosyncratic, unsystematic. Any and all subjects that aroused my curiosity and admiration could be brought to bear on what I understood as philosophical inquiry: literature, history, art, love of nature, social activism, law and justice, ethics, travel, architecture, science, in fact, every subject that involves human thought and appreciation.

While my subsequent education in philosophy did impart much-needed discipline, order, and rigor to my thinking, my roving instincts remain, and my approach to the world of ideas, organically grown, remains sweeping. My general understanding of and approach to philosophy has changed little. I find myself now, as I did then, very often disregarding the dividing lines between what’s usually referred to as philosophy proper and the wider world of ideas, since I find that they inform and rely on one another to such a degree that they’re inextricably intertwined. Perhaps that’s why I’m still particularly drawn to the work of the early philosophers, when their pursuit of wisdom was all-encompassing, as well as to popular philosophers of today, who address the questions and problems of concern to the public square and take care to present them in broadly accessible ways. Logic, ethics, morality, metaphysics, politics, mathematics, law, logic, theology, epistemology, science: all of these were philosophy, and only given their own names later as areas of inquiry grew ever-more specialized. Some remain branches or subsets of philosophy, and others are generally classified as discrete fields of inquiry.

But it still seems to be that none of these fields of inquiry make sense or even exist without the philosophical approach, and philosophy would be little more than a set of idle questions without them. And most of us are still asking questions about all of them at least sometimes, and seek answers, and are enriched when those who make it their business to think deeply about these things care to engage as many of us as they can. I believe there’s a very important place in philosophy for this broad-based, public-square approach, especially for those of us who see philosophy not only as a rarified academic field–though that’s wonderful too–but as a facilitator of the good and examined life that most of us seek to live. 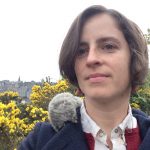 Creator and editor of Ordinary Philosophy blog, podcast, and history of ideas travel series, Cools holds a Bachelor’s Degree in Philosophy with an emphasis on Applied Ethics and Law from Sacramento State University. She’s also an avid hiker and quilter, loves mystery stories and music, and thinks coffee, ale, cheese, and a British breakfast are among the most delightful things the world has to offer.  Read more about Cools and her work here.
Facebook
Twitter
WhatsApp
Linkedin
ReddIt
Email
Print
Previous articleMAP Chapter Profile: University at Albany, SUNY
Next articleAPA Member Interview: Colin Klein

How a hackneyed romantic ideal is used to stigmatise polyamory

The Self and the Selfie

How to Meet People Where They Are