In May 2014, I sent out the first email to gauge interest in a University at Albany Minorities and Philosophy chapter. More students and faculty showed up than there were chairs in our seminar room. Our chapter now has about 40 undergraduate and graduate members who attend events.  It is led by an elected executive board of six undergraduate students, a graduate student advisor, and a faculty advisor. The chapter is recognized by the UAlbany Student Association (SA).

UAlbany is a large public research university whose student body comprises about 13,000 undergraduates and 4,300 graduate students. About 16% of the student body identifies as Black/African American, 15% as Hispanic/Latino, and 9% as Asian. 6% of our students are international. Our university is known for its ambitious Educational Opportunity Program (EOP), which provides academic support and financial aid to academically promising students who come from economically disadvantaged backgrounds.

One of the aims of the UAlbany MAP chapter is to mirror our institution’s diversity in our philosophy department. This is a long-term goal, but there are some promising early signs. Our MAP members were well represented at this year’s philosophy department commencement ceremony, and our chapter president, Sydelle Alvarez, won a departmental award for leadership. I’ve been the faculty advisor for the last two years, with support from Professors Marcus Adams, Lisa Fuller, Rachel Cohon, and our chair, P.D. Magnus. Professor Monika Piotrowska is taking over as faulty advisor while I’m away on sabbatical for 2016-17. Here’s a sampling of our chapter’s activities in its first two years. 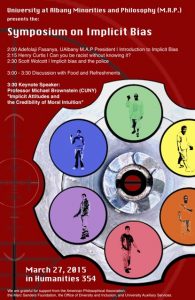 The philosophy department already hosts a regular colloquium series, but it is rarely attended by undergraduate students, despite regular announcements from faculty. The MAP Symposium reversed the existing paradigm by having the students invite the faculty to an event that they structured and organized. The MAP chapter members chose the topic, invited the speakers, and hosted the event.

The symposium included three student speakers who gave 10-15 minute presentations. The chapter president, Adefolaji Fasanya, introduced the concept of an ‘implicit attitude’. Henry Curtis, a graduate student member, addressed the question, “Can you be racist without knowing it?” And graduate student member Scott Wolcott gave a presentation on implicit attitudes and policing. Professor Michael Brownstein (CUNY) gave the keynote address titled “Implicit Attitudes and the Credibility of Moral Intuition”. The Symposium attracted a good number of students and faculty from other departments, such as Public Health, Social Welfare, Africana Studies, Sociology, and Psychology.

More than 60 people participated, making it one of the best attended departmental events in recent memory. In preparation for the Symposium, two graduate students from my moral psychology seminar, Toan Tran and Henry Curtis, hosted a lunch series to introduce chapter members to the science of implicit attitudes.

The event and the preparatory sessions were supported by grants from the Marc Sanders Foundation as well as the American Philosophical Association.

This event was structured as a “pizza social”, that is, free pizza and open conversation. MAP members kicked off the event with a short presentation that posed questions such as, “Do instagram filters ‘whitewash’ dark skin?”, “Are you complicit in racist beauty standards by lightening your own complexion with instagram?” and “Is there anything wrong with the desire to appear to be of a different race?” The event drew students from the Albany State University Black Student Alliance (ASUBA) and UAlbany’s Fuerza Latina.

After surveying our members, we found their most common concern is that when they graduate with a philosophy degree they will face uncertain employment prospects. This anxiety is particularly common among students who are the first in their families to go to college and students who have no friends or family members who have studied philosophy. Our roundtable included former philosophy students from our program who have gone on to meaningful careers both in and out of academia, including careers in teaching, administration, law, medicine, and the non-profit sector. Students asked questions of the panel ranging from, “Which other fields combine well with study in philosophy?” to “How do you square religious faith with being a philosophy major?” and “How did you break it to your parents that you were going to major in philosophy?” This event was supported by a grant from the Marc Sanders Foundation.

This informal event was co-hosted by UAlbany MAP and the graduate student-led UAlbany Philosophy Association (UAPA). Instead of hosting the event at the philosophy department, MAP used the university Gender and Sexuality Resource Centre.

The event attracted participants who had not attended other MAP events. The conversation was initiated by a short presentation by chapter president, Sydelle Alvarez, who raised questions such as, “When, if ever, is it ok to refuse to date members of a particular race?” and “What, if anything, is wrong about racial fetishes?” In preparation for the conversation, we circulated Robin Zheng’s “Why Yellow Fever Isn’t Flattering: A Case Against Racial Fetishes”. The Graduate Student Association (GSA) provided money for food and refreshments, and Sydney Faught, doctoral student, helped to structure the conversation.

Here are some things we have learned over the last couple of years:

Jason D’Cruz is Associate Professor in the Philosophy Department at the University at Albany, SUNY, and a visiting fellow at the Centre de recherche en éthique (CRE) at Université de Montréal for 2016-17. He works primarily in ethics and moral psychology on the topics of trust, promising, rationalization, and self-deception. He is presently writing a book on the moral stakes of distrust.

If you have something to say about diversity and inclusiveness in the philosophy profession, we’d love to hear about it. Pitch a post to us here.