Miriam Solomon’s Author-Meets-Critics session was one of the last events at the APA’s 2017 Central Division meeting. While the session faced a couple of setbacks insofar as the two critics Dr. Leah McClimans and Dr. Kirstin Borgerson were unable to attend, these challenges did not hinder the philosophical discussion on Solomon’s book Making Medical Knowledge. The initial part of the session included 10 audience members, and the panel included the author, Miriam Solomon, doctoral candidate Craig Bacon, and me, the incoming Secretary-Treasurer for the Central Division, as chair. 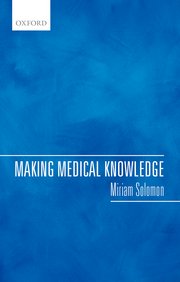 The session began with Solomon summarizing her book and then summarizing the two criticisms from Borgerson and McClimans. In her own words, Solomon says that Making Medical Knowledge tells an epistemological story that links three of the most prominent methods – consensus conferences, evidence-based medicine, and translational medicine. She includes a fourth method, narrative medicine, to represent the “art” side of medicine as opposed to the “science” side of medicine. In her book, she examines the strengths and weaknesses of all four methods.

Solomon went on to explain how her own epistemological (and social epistemological) concerns about consensus conferences, which began in the 1970s, and evidence-based medicine had made her wonder if these methods were susceptible to groupthink and bias. Solomon shared her further concerns about the lack of clarity in translational medicine and the possible untrustworthiness of patient testimony in narrative medicine.

In the end, Solomon argued for a methodological pluralism of the four methods, and suggested a stance of “epistemic equipoise” in order not to privilege any one method over the other. Her first critic, Borgerson suggested “epistemic humility” as a better term, and Solomon agreed on the change of the term. Solomon’s second critic, McClimans, situated Making Medical Knowledge’s methodological pluralism within feminist ideas, but adopted an hermeneutical standpoint to defend narrative medicine against Solomon’s criticism that the narrative medicine community is too quick to accept the truth of patient narratives.  Following up on McClimans’ defense of narrative medicine, Mr. Bacon discussed in more detail the Gadamerian approach suggested by McClimans.

The audience Q&A ranged from the concrete application of Solomon’s approach to emergency room and (NICU) neonatal intensive care unit situations to the more theoretical reflection of whether Dr. Solomon’s pluralistic approach might end in relativism (an initial concern raised by Borgerson). In light of McCliman’s suggestion, other audience members brought up intersectional issues of how Solomon’s approach was inherently feminist and might counteract forms of gender and racial bias in medical knowledge and practice. After another hour of questions and answers, we announced that the group could continue their philosophical discussion in the philosopher’s natural habitat: the hotel bar. With drinks in hand, participants crowded around a table as Solomon continued the lively discussion on her work. What a perfect way to end the Central Division meeting in Kansas City!

Elyse Purcell is the Secretary-Treasurer of the American Philosophical Association for the Central Division and is an Assistant Professor of Philosophy at the State University of New York (SUNY) at Oneonta. She specializes in bioethics, philosophy of mind, and social and political philosophy.

How Metaphors Can Illuminate Neuroscience

Survey: What Matters to Philosophers?