How to Meet People Where They Are

But however we let the public know what we’re up to, this type of public philosophy requires people to come to us to listen to what we have to say. When philosophers engage with the public in this way, we’re the ones who decide and frame the topic; at public lectures, we’re the ones who control the floor when and if the public has a chance to respond. Which is great. But I would suggest that this isn’t the only type of public engagement that is worthwhile for philosophers today. In particular, I think it’s important to reason with people about the philosophical questions and ideas that they bring to the table, to seek out people in places where they are prepared to reflect on the philosophical problems that matter to them – that is, to meet people where they are. 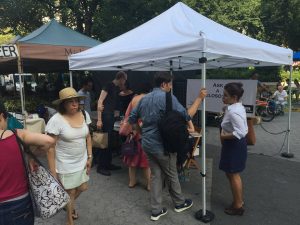 As I wrote in a previous post for this blog, some local philosophy professors and graduate students and I have started doing this by organizing “Ask a Philosopher” booths around New York City. We set up a table at a farmers market with a little banner inviting people to “Ask a Philosopher.” Some visitors are eager to start conversations on their own, but for everyone else we put out a bowl of philosophical questions, a bowl of thought experiments, and a bowl of candy. And people show up! At the last booth (our third), we talked about perception and the mind-(in)dependence of reality with some artists, whether to eat meat with a group of teenagers, integrity with a defense lawyer, neo-logicism with a mathematician, and drone warfare with someone who works for an international NGO. Several visitors got into long, serious discussions amongst themselves. It was a ton of fun.

While I think it would be great if people set up similar booths elsewhere, I’d like to start a discussion about how to meet people where they are. Where else would you set up an “Ask a Philosopher” booth? What questions or thought experiments would you use to get conversations started? Philosophers are already discovering new audiences and addressing their questions through Reddit AMAs and AskPhilosophers.org. What other venues or formats could we use to meet people where they are?

The next Ask a Philosopher booth will be on September 18th, 2016 at the Brooklyn Book Festival at Brooklyn Borough Hall.

Ian Olasov is a Ph.D. student in philosophy at the Graduate Center of the City University of New York. The Ask A Philosopher booth is funded by an APA small grant from the Berry Fund for Public Philosophy.

If you’d like to write a post for the APA blog, we’d love to hear about it! Pitch it to us here.

What Institutions, Departments, and Individuals Can Do to Help Adjuncts

Speaking Pro Re Publica in Ancient Rome and Today (Part 4)