Greg Salmieri was part of the Night of Philosophy and Ideas held at the Brooklyn Public Library in January.  I spoke with Greg about public philosophizing and the issue of whether, for our own peace of mind, we should unfriend or unfollow people with whom we disagree with politically and who post misinformed rants on Facebook.

Greg, you were part of the Dilemma Series and hosted a discussion at 2:30 a.m. on Facebook epistemology.  Can you talk about the question you addressed and how you approached it?

I led a discussion of a question that (I gather) was submitted to the organizers of the event. The question was whether one should unfriend or block people on Facebook who are posting things one regards as grossly ignorant and wrong, or whether by doing so one retreats into a “bubble” of like-minded people. I made a few suggestions for ways people might think about the issue, I tried to distinguish different legitimate ways of using of social media, and I suggested a few things to keep in mind when trying to engage in political discussions with people who you think are very misguided (and perhaps ill motivated), but mostly I just moderated the discussion and encouraged the participants to share their views and experiences, and I tried to highlight some of the more philosophical dimensions of what they were saying. 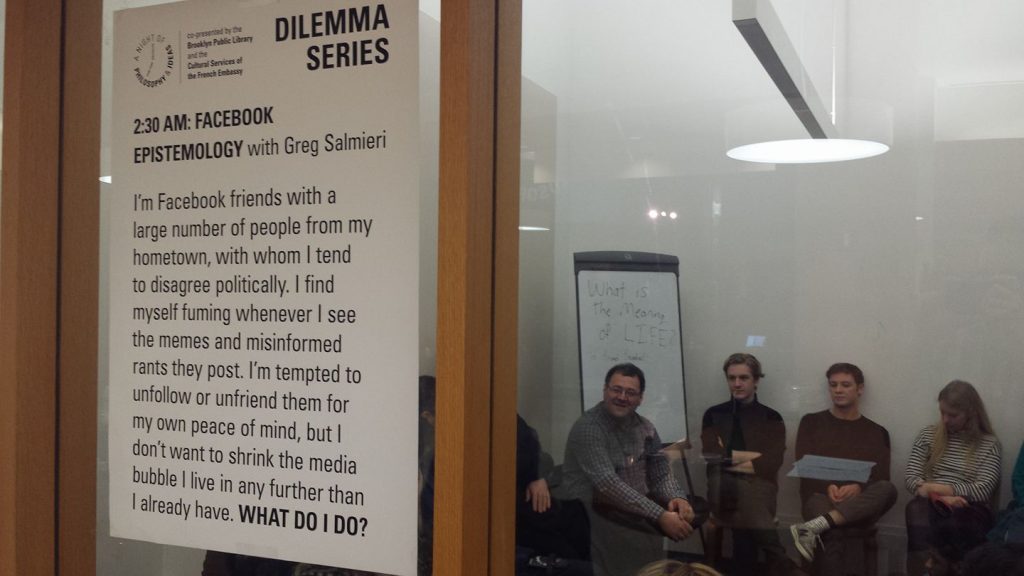 How did people engage with you?

The little room where we held the discussion was packed, and everyone was eager to talk. The session was supposed to be 30 minutes to an hour and we ended up going for almost three hours. Towards the end we were exploring ideas that were a bit tangential to the announced topic, but I think it was an exciting conversation for all concerned.

What do you see as the most important benefit of such an event?

For those of us who are professional philosophers, I think the most important benefit is interacting as philosophers with a wider segment of the general public than we ordinarily do. I think we’re only being productive as philosophers if our work provides value to people in other fields and other walks of life. And I do think academic work—journal articles and the like—does that, if one does it well. But for most of us the only direct impact we make with our work on other people’s lives is through our teaching, and (no matter where you teach) the students are bound to represent a pretty small and relatively homogenous demographic. Thinking about how to share philosophy directly with people who you wouldn’t have in class—for example with small business people who are older than most students and have different concerns, or with people who haven’t been to college—gives us a perspective on what in our work matters and why it matters, and it gives us a chance to try to provide that value to people more directly. The value for the people there is the value of philosophy itself. What that is is a big subject, but part of it is that it helps one to think more clearly and more carefully about everything, and to recognize and evaluate assumptions that you ordinarily take for granted.

What do you hope people will take away from it?

I hope they take away the values I just mentioned. But let me name three of the specific points I made in the discussion I led, which I think are helpful.

One is that when we strongly disagree with people, if we want to understand and engage with them we need to work hard to understand their perspective, and this means seriously entertaining ideas and values (even fundamental values) that are alien to us. But doing this isn’t the same as thinking that there’s something good or right about the position. It may turn out that when we come to understand the other side, we recognize that there’s some truth there that we’ve missed. But sometimes we conclude that they’re misguided and immoral. I think this distinction between seeking to understand the other side and expecting to find some truth there is important, because if we don’t draw it, we’re going to be very reluctant to try to understand the ideas of people and groups—for example, Nazis or Communists, or Islamists—who we think are evil. We’ll see it as sympathizing with them or whitewashing them. But we need to work to understand these ideas in order to navigate a world where some people hold them and in order to reach some of the people to whom these ideas appeal. Moreover, in those cases where we don’t find that there’s something right in the ideas that we initially reject, we often discover something in the faulty patterns of thinking behind them that we then notice in other areas of our own thinking, and that we can correct.

A second point is that when you are trying to engage in discussion with someone you disagree with, you need to find some goal for the discussion that you can share. A good one is identifying the roots of the disagreement, and trying to come up with things you can each do (read about, look out for, etc.) to figure out which of you is right on those issues.

And this relates to the third point, which is that minds are rarely changed about anything important during a conversation. If someone changes his mind as a result of a conversation it’s usually by reflecting afterwards—sometimes months or years afterwards. So what we should aim for in conversations, is not to convince people here and now, but to plant seeds of ideas or identify questions to pursue that will later pay dividends.

Can you describe the experience of being there?

I arrived a little after 1:00 a.m. and stayed until about 6:00 a.m. and was struck by the number of people from many different walks of life (as well as many different ages, races, etc.) and by the seriousness of their interest in ideas. There was some music and dancing in the central hall of the library, which I suppose was it was intended to make the event feel like a night out. And it was fun to stroll through that area, but it’s clearly not what people were there for. For most of the time I was there, that area was sparsely attended, and the lectures and discussions were jam packed, with all the faces looking attentive and thoughtful.  I sensed a lot of enthusiasm from everyone I talked to.

Did you manage to see any other presentations?

I saw Laurie Murat’s talk on “The ‘Post Truth’ Era” and I popped in and out of a few other sessions just to get a feel for what was going on.

Why do you think so many people are interested in it?

I’m not sure. I think philosophy is and should be relevant to everyone’s life, but not everyone immediately realizes it is, and is eager to come to philosophy talks. I think the large and enthusiastic audience is a credit to the organizers of the event who evidently did an excellent job promoting it.

Gregory Salmieri is a Philosophy Fellow at the Anthem Foundation and teaches at Rutgers University. He is co-editor of A Companion to Ayn Rand (in the Blackwell Companions to Philosophy series), editor of a forthcoming collection of essays on Aristotle’s Epistemology.

The Job Market: How to Get an Interview at a Community...

To be happier, focus on what’s within your control