These issues are taken up through a provocative engagement with a text of central importance to the philosophical canon in Marcano’s essay, “Re-Reading Plato’s Symposium through the Lens of a Black Woman.” This paper was originally delivered at the inaugural meeting of the Collegium of Black Women Philosophers and was later published in the volume Reframing the Practice of Philosophy. Eschewing the typical focus on Diotima’s tutelage of Socrates in the philosophy of love, Marcano focuses on Alcibiades’ intoxicated remarks on Socrates. Alcibiades draws out the desirability of philosophy as embodied in Socrates; philosophy incurs, in short, a desire to be a better human being. Yet the figure of Socrates, if read from Alcibiades’ perspective, is also deeply troubling: he seems incapable of reciprocating love, to the point of appearing inhuman. Marcano juxtaposes this conflict with the problematic relationship between philosophy and black women. Black women stand as that which philosophy—at least in its instantiation as a discourse centered in white men’s perspectives—is incapable of loving. Black women typically appear within much philosophical discourse not only as non-philosophical but also as that which philosophy lacks any reason to value. Does this imply that black women ought to reject philosophy? For Marcano the answer is clearly no: the monstrous tendencies of philosophy are not, as such, reasons to forswear philosophy tout court. Indeed, human love means that one is responsible for caring for one who is flawed, and we note that Alcibiades, though oft-scorned by Socrates, nonetheless takes on the lover’s responsibility to the beloved. For, indeed, how could Socrates and philosophy in general improve unless those they rejected took the care to demonstrate the error of their ways?

Socrates, then, symbolizes philosophy that sees itself, in short, as radically transcendent. That this is a form of self-imposed dehumanization is evident from the viewpoint of Alcibiades. That this in turn suggests an existential problem for philosophy and philosophers is a point developed by Marcano in her essay, “Particularity and Situated Universality.”  Drawing on the work of William R. Jones and Simone de Beauvoir, Marcano argues that the particularity of a philosophical perspective is inevitable, even if this does not entail that philosophy is thereby particular rather than universal. Philosophy can be universal, Marcano contends, only through its being situated. In that sense, philosophy envisioned as radically transcendent may thus be diagnosed, in existential phenomenological terms, with a bad faith flight from facticity. Philosophy that conceals its situation—for instance, philosophy that disavows its character as being thought from a white male perspective—thus ironically undercuts its universality. Philosophy that, like black feminist philosophy, is in a position where denial of its situation is next to impossible thus faces, in contrast, a perhaps unexpectedly direct confrontation with its own universality.

These metaphilosophical explorations are also pursued in Marcano’s contribution to Convergences: Black Feminism and Continental Philosophy, a volume she co-edited with Maria del Guadalupe Davidson and Kathryn T. Gines. That essay, “The Difference that Difference Makes,” offers a compelling addition to the now-widespread discussions of social construction, both in philosophy and more broadly. Marcano suggests that whereas the realization that sex and gender are socially constructed may open up a variety of avenues for critique and social transformation, it does not follow that the avowal of race as socially constructed is equally productive; the latter, indeed, may be peculiarly regressive. Through an examination of the work of Barbara Christian, Marcano raises the problem that philosophy—as well as the imperative imposed upon many women of color to explore their ideas through the work of major figures in Euro-Continental thought—may, in short, undermine efforts to describe reality. This issue is further explored in her reflection on Euro-Continental feminism, “The Color of Change in Continental Feminist Philosophy.”  In parallel, Marcano’s “White Racial Obligation and the False Neutrality of Political and Moral Liberalism” suggests that moral philosophy faces peculiar problems surrounding the implicit and concealed whiteness of its articulation. The imperative to articulate abstractly universal maxims leads to a failure to understand the ways in which everyday moral practice is erected upon obligations that are racial in character, even if the ascendance of liberal rejections of racism causes that racial character to be disavowed.

Philosophy, then, confronts the problem of a long tradition of evading the particularity of its enunciations whilst rejecting the contributions of those that it accuses, in short, of being particular. To rethink what philosophy is, then, is paramount, and to do such rethinking from the standpoint of black feminism, though not in itself sufficient, is necessary to that end. As Marcano notes in a roundtable discussion on black women philosophers:

Tom Meagher is a doctoral student at the University of Connecticut at Storrs, where he is completing his dissertation, “Maturity in a Human World: A Philosophical Study.”  His areas of specialization are Africana Philosophy, Social and Existential Phenomenology, Political Philosophy, Caribbean Thought, and Philosophical Anthropology. 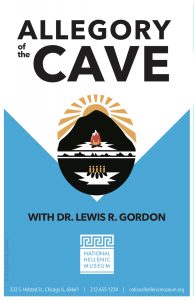 The National Hellenic Museum will observe World Philosophy Day with Professor Lewis Gordon of the University of Connecticut, Rhodes University, and the Global Center for Advanced Studies, in a discussion of Plato’s Allegory of the Cave

Caribbean Philosophical Association 2018 Conference: Shifting the Geography of Reason XV: Ways of Knowing, Past and Future
June 19-22, 2018 in Dakar, Senegal
Philosophy Born of Struggle will also be seeking abstracts for its special sessions at this conference.

Public Affairs Quarterly will publish a special issue devoted to the topic “Race and Public Policy.”

Submissions on any philosophical topic concerning race and public policy will be considered.   Submissions should be in Microsoft Word format and should be double-spaced and prepared for blind review. The journal prefers manuscripts of 6,000-9,000 words in length but articles outside these limits may still be considered.  Articles intended for consideration for inclusion in this issue should be submitted by December 31, 2018 via the journal’s online submission process at http://ojs.press.illinois.edu/index.php/paq/. The deadline is far out (December 2018), so that people who are not currently working on a relevant topic still have time to produce a submission.

Questions about potential submissions should be directed to the Editor, David Boonin, at david.boonin@colorado.edu.

Diversity and Inclusiveness May 11, 2016