In an ‘Author Meets Critics’ session, authors Deborah Brown of University of Queensland and Calvin Normore of UCLA met with critics John Carriero and Gideon Manning to discuss their book Descartes’ Ontology of Everyday Life.  Here Brown reflects on the session.

Deborah, can you tell me about your book and what you think is the most important or compelling aspect of it?

Our book, Descartes’ Ontology of Everyday Life offers a way of conceptualizing ordinary objects—including animals, plants, automata, the human being and social and political unions—consistent with the terms of Descartes’ metaphysics and physics. We argue that Descartes recognizes wholes that are more than the sum of their parts and that these wholes are real (mind-independent) and irreducible. If we are right, Descartes’ ontology is much richer than one might suspect if one just focuses on the two basic categories of his metaphysics: substance and mode.

What intrigues you most about Descartes?

Descartes is the transitional figure between ancient and medieval philosophies and the modern philosophical approaches that we still very much operate within today. What intrigues me is the extraordinary ingenuity he displays in shaping debates, philosophical methods and concepts, and in the way he operates as a philosopher—engaging (and recording his interactions!) with a vast network of thinkers—in a way that is very modern. Obviously, no philosopher works in a vacuum and much of the terminology he uses has a long history, which always needs to be taken into account, but he is always forward-looking, always asking how ideas can be used to solve the pressing problems of the day. This represents a revolutionary break with the “commentary tradition” and much of the extraordinary progress philosophy made subsequently was due to his facilitating this break.

Our critics–John Carriero and Gideon Manning–asked a number of challenging and thought-provoking questions, including why we couldn’t just accept that ordinary objects are accidental unities that form in the plenum like hurricanes or whirlpools; why we insist instead that they are una or entia per se (though not substances); whether we can make sense of Descartes’ talk of functions without teleology (which we claim we can do); and whether there is any basis for normative comparisons beyond the sphere of human interests.

What sorts of discussions took place with the audience?  What aspects were attendees most interested in?

Attendees were interested in the way we use our naturalistic reading of Descartes’ functionalism—based on a notion of reciprocal dependence between distinct parts of an integrated biological or mechanical system—to solve Des Chene’s “boundary problem,” the problem of specifying the boundaries of an organic system without having substantial forms or any other metaphysical glue to rely upon. There was also an interesting discussion of our application of the category of ‘true and immutable natures’ to ordinary objects as irreducible composites, and a further, interesting but related discussion of how Descartes’ physics has elements (including ideas about work and variegation in matter) that would support our view. It was a great discussion from which we took away many interesting and helpful suggestions for clarifying and strengthening the case we are making.

What do you hope participants will take away from your session?

A sense that there is more in Descartes’ universe than might initially seem to be the case, and that there is a need to continue the conversation about the topics we introduce in our book. It’s also important to see that Descartes’ natural philosophy is a foundation stone for his ethics and political philosophy and that these should not be studied in isolation from one another.

One of the most interesting and as yet unanswered questions is how Descartes conceives of the relationship between levels of explanation—how do the functional and the physical levels of analysis interact, for example? Just what does ‘reductionism’ mean for a theorist like Descartes? Just how fine-grained is the plenum and if it is chunky, how does this affect our understanding of his physics, (in comparison with someone like Spinoza, whose plenum appears more homogenous)?

How can Descartes’ Ontology of Everyday Life shed light on public discourse and debates?

One topic that arises in the book is how to understand the relationship between what Wilfred Sellars described as the ‘manifest image’ in contrast to the ‘scientific image’—whether the world as it appears is some kind of phenomenal projection in light of the fact that its categories do not map onto what our best physics is telling us is really there. Descartes is sometimes thought of as the original eliminativist about macroscopic objects, but we try to show that he isn’t and that eliminativism isn’t the obvious conclusion one has to draw from accepting a physics that doesn’t mention clocks, animals or mind-body unions. The book also looks at Descartes’ conception of the person—not just the whole human being as an integrated system, but at what it means to experience oneself as a person, namely, as embodied and immersed in social life. And then we turn in the last chapter to the idea of a corporate person, a social unit whose activities are co-ordinated and mutually sustaining, which raises questions which are still important today. Are there collective entities that are more than the sum of their parts and what then does their identity and agency consist in? Under what conditions does a multitude become one and what are the consequences of its doing so?

We were so fortunate to have critics who engaged with us prior to the session so that we could maximize the scope of the discussion and avoid having a session that turned into a call for clarifications or what we refer to as a “‘P’—‘Not-P’” session. We felt we were part of a community of inquiry rather than an author-meets-critics session construed on the model of a boxing match—philosophy as a combat sport—as these things sometimes turn into. I would urge participants to make such sessions as collaborative as possible as early as possible.

Any general reflections on the Central meeting overall?

The meetings represented a diversity of philosophical sub-fields, topics, philosophical approaches and people, and created a space for the discipline to reflect on itself as a profession that celebrates diversity. This was timely and engaging. And a fun time was had by all, and fun, as Dr Seuss says, is good. 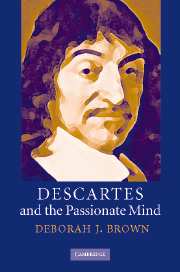 Portrait of René Descartes by Frans Hals via Wikimedia Commons.

The Limits of Reason

The Illusion of Sense (IAI video)