This post is the first in a series of reflections on the APA Central Division Meeting in March 2017 in Kansas City.

In an ‘Author Meets Critic’ session, author José Zalabardo of University College London met with Michael Kremer and Ian Proops to discuss his book Representation and Reality in Wittgenstein’s Tractatus (Oxford University Press, 2015).  I spoke with Zalabardo about the experience.

José, congratulations on your book Representation and Reality in Wittgenstein’s Tractatus. For those who couldn’t make it to your Author Meets Critics session, can you give an overview of your book?

Wittgenstein’s Tractatus presents an account of the structure of reality and of how we represent it in thought and language. I argue that this account arises from Wittgenstein’s strategies for dealing with three different problems. The first is the problem that he inherited from Russell of how to make room in our account of mental representation for the specific way in which we represent things as combined with one another. The second is the problem of how the unity of facts arises from the multiplicity of their constituents. And the third is the problem of the epistemology of logic—of how we know, for example, that a conclusion follows logically from a set of premises. Wittgenstein’s picture theory of propositional representation is his solution to the first problem. He deals with the second problem by embracing a metaphysical picture in which facts are ultimate, indivisible units, not the result of combining more elementary items. And he addresses the third problem with the view that we can see logical relations in the structure of the symbols with which we represent the world. 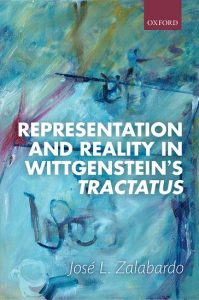 What do you think is the most important or compelling aspect of your book?

I think I give plausible explanations of aspects of Wittgenstein’s thought that may have appeared mysterious or unmotivated. I also spell out the grounding of his central ideas in the problems that he inherited from Frege and Russell. And I think that, through my interpretation, the early Wittgenstein comes out as a more appealing philosopher than in more standard interpretations.

What intrigues you most about Wittgenstein?

Throughout his philosophical career he gives the impression of being driven by a fundamental insight that he struggles to articulate. I feel that if I could see what he was seeing many important things would suddenly become very clear.

The relationship between reality and our representations of it in thought and language would seem to be an area of critical importance given the current state of the world.  How can your thinking on this help us to make sense of the world?

Important problems were raised for the mutual compatibility of the three argumentative strategies that I ascribe to Wittgenstein. We also looked in some depth at the intelligibility of the metaphysical picture that I ascribe to Wittgenstein, according to which objects, properties and relations are not constituents of facts, but features that facts have in common with one another.

What sorts of discussions took place with the audience?  What aspects were attendees most interested in?

Questions were raised about my account of Wittgenstein’s methodology, specifically about how the ideas that I attribute to him might be squared with his notorious contention that his whole book is a piece of nonsense, and that the way to learn from the book is to come to accept this fact.

I would like to investigate the extent to which Wittgenstein’s ideas on mental and linguistic representation are compatible with what we know about these phenomena from an empirical point of view. I would also like to find out whether his idea that facts are fundamental, indivisible units can be articulated into a plausible metaphysics. Another potentially fruitful area of research is the idea that the logical structure of propositions, rather than determining logical relations, is produced by these relations—that propositions acquire their structure as a result of the inferential links by which we take them to be connected.

What do you hope participants will take away from your session?

I hope my critics and I managed to convey the sense that Wittgenstein’s Tractatus is a fascinating philosophical work, containing groundbreaking ideas that aren’t always fully reflected in standard interpretations.

As an author there can be no greater privilege than having other scholars devoting time and effort to engaging with your ideas. Your goal in the session shouldn’t be to refute their criticisms, but to join them in a common quest for the truth. Critics should have the same cooperative approach. They are not there to prove the author wrong, but to contribute their own perspectives to help the author make progress with the ideas presented in the book.

What are you working on now?

I’m trying to develop an approach to truth and meaning along pragmatist lines. The idea is to explain these concepts not by specifying the condition that a sentence or belief has to satisfy in order to count as true, or in order to have a certain content. The alternative approach that I’m exploring takes as its starting point the rules that govern the practice of ascribing truth and content, and seeks to explicate truth and content as that which is ascribed according to these rules.

It’s always a wonderful experience to come to a (for me) remote part of the world and see that there are people prepared to give up other things for the privilege of doing philosophy, thinking of the same problems you are struggling with, in some cases having very similar ideas. I did my PhD in the States between 1988 and 1994. This is my first time back in the country. The trip has brought back to life memories from that period, a quarter of a century ago.

José Zalabardo is a professor of philosophy at University College London.  He works in epistemology, metaphysics and philosophical semantics.  Peter W. Hanks (University of Minnesota–Twin Cities) chaired the session, while Michael Kremer (University of Chicago) and Ian Proops (University of Texas at Austin) provided critical commentary.

APA membership includes many exclusive benefits. To get access to these benefits, join or renew today! Proceedings and...
Read more
APA

Paper length and limitation to one submission APA members may submit papers to the program committee of...
Read more
APA

About the Pacific Division

The Pacific Division is one of three divisions of the American Philosophical Association, along with the Central and Eastern Divisions. Each year, the division organizes...
Read more
APA

History of the APA

The American Philosophical Association was founded in 1900 to promote the exchange of ideas among philosophers, to encourage creative and scholarly activity in philosophy,...
Read more
APA

The American Philosophical Association is pleased to announce that Professor Kristopher McDaniel (Syracuse University) has been awarded the 2018 Sanders Book Prize for his...
Read more
APA

Results of the Recent APA Elections

Over the last few months, members of the APA elected new divisional officers, a new at-large member of the APA board of officers, and...
Read more

Inside the APA: The Changing APA