As has been aptly noted by many working in our profession, philosophy has a pipeline problem. While minorities (women, people of color, and those from low-income backgrounds) may be well represented in undergraduate philosophy classrooms, their numbers drop substantially in graduate school, and they are even less well represented in tenure-track appointments. There are a number of excellent programs meant to address this drop-off. However, in addressing the pipeline problem exclusively at the undergraduate level, we still miss a large number of those students who simply never make it into the philosophy classroom at all – students who, as they leave high school for college, never even consider a career in philosophy or know what philosophy is.

If the pipeline problem is happening before students make it to the post-secondary level, then we need to make more concerted efforts to bring philosophy high school students. Speaking from experience, I nearly didn’t make it to philosophy – I had no idea it was a subject one could study or pursue as a serious career. I believe many high school students are in a similar situation, especially those attending under-resourced schools, where they are unlikely to have had opportunities to study philosophy. 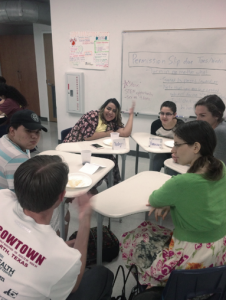 In Corrupt the Youth, we use a combined philosophy/social justice curriculum. This means, for instance, that students might study epistemology/perception, and then discuss cognitive penetration or perceptual inaccuracy as it relates to police brutality and implicit bias. Or, they might study Kant’s categorical imperative, and then consider the morality of slavery or sex work, or the practices of specifically recruiting poor people of color for the Vietnam War (Eastside Memorial, the site for Corrupt the Youth, is so named because a number of their students died during the Vietnam war).

For instance, in our in-school program, a sample class might begin by asking the following key question: Are we good people when no one is watching? This is the question Socrates poses in “The Ring of Gyges.” In this dialogue, which the students read, Socrates suggests that most people would not behave morally without the fear of being caught and punished. We then ask students to apply this lesson to a contemporary issue: police corruption. Using the key question and the text as a guide, we encourage students to respond to the question: should police offices be required to wear body cameras? The goal is for students to be able to connect every philosophical topic they cover with a relevant social issue or contemporary moral problem. In this way, students come to see that philosophy is valuable outside the classroom as well as within it. 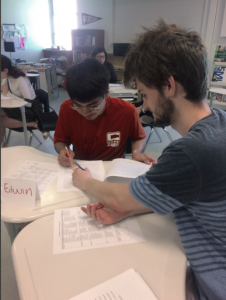 We believe philosophy provides a rich variety of frameworks that allow students to think about problems, both social and personal, in increasingly meaningful and productive ways. By using the tools of philosophy to work toward solving these sorts of problems, students can rediscover the excitement of learning and of intellectual curiosity. The play inherent in philosophy allows students the opportunity to revisit the joy they once felt in learning—that all people feel upon arriving at the cusp of discovery—and to leverage this into a greater sense of opportunity.

Corrupt the Youth hopes to provide a model of what robust and engaging pre-college philosophy programs can offer. Aside from our Austin location, we also operate a program in LA through the LGBTQ Youth Center. Additionally, drawing inspiration from programs like Duke TIP and the Freedom Summer Collegiate, we hope in summer 2018 to offer a four-week long summer philosophy camp for disadvantaged students, specifically students who are members of groups underrepresented in philosophy. We want students to be inspired to become lifelong learners who see the study of philosophy not only as a pathway to success but as a life-changing experience. In doing so, we can build a new generation of bright, young people who are better thinkers and better listeners, who are more empathetic and more reflective. But we also do a service to the profession in offering philosophy to those populations who lack access to it, and can benefit from it most. Offering a pre-college program and philosophy camp can increase the diversity we see in philosophy, and thus contribute to the marketplace of ideas.

Now, more than ever, we need to teach children the values of truth and knowledge, of listening to and learning from others, and how to grapple with difficult, but important ideas. I can think of no better way to accomplish this goal than through engaging students with the long and storied tradition that philosophy provides. In doing so, we can give students a sense of empowerment and agency.

Briana Toole is the founder and director of Corrupt the Youth. Corrupt the Youth operates as an in-school program, with two locations currently – one in Austin and one in Los Angeles. They are in the process of creating a summer philosophy institute for high school students in the Austin area. They are currently raising money for the summer philosophy institute here. You can read write-ups on their program here and here.