The superhero film Captain America: Civil War was released in the US last weekend, grossing $181.8 million and ranking it the fifth largest film opening of all time in the US.  APA member Mark D. White, author of A Philosopher Reads…Marvel Comics’ Civil War: Exploring the Moral Judgment of Captain America, Iron Man, and Spider-Man, talked to us about philosophical themes in the film, including good vs. right, utilitarianism vs. deontology, government surveillance vs. oversight – and squabbling Olympians.

Why are the Marvel superheroes having a “civil war”?

In both the comics from 2006-2007 and the current film, the superheroes are split over the issue of government supervision. A series of public disasters involving superheroes leads the government to pass legislation giving them certain domain over superheroes’ activities, including oversight, accountability, and control. Some of the heroes, such as Iron Man, embrace this as an inevitability that needs to managed rather than opposed, and others, such as Captain America, see it as an excessive limit of civil liberties and free activity and resist it completely. 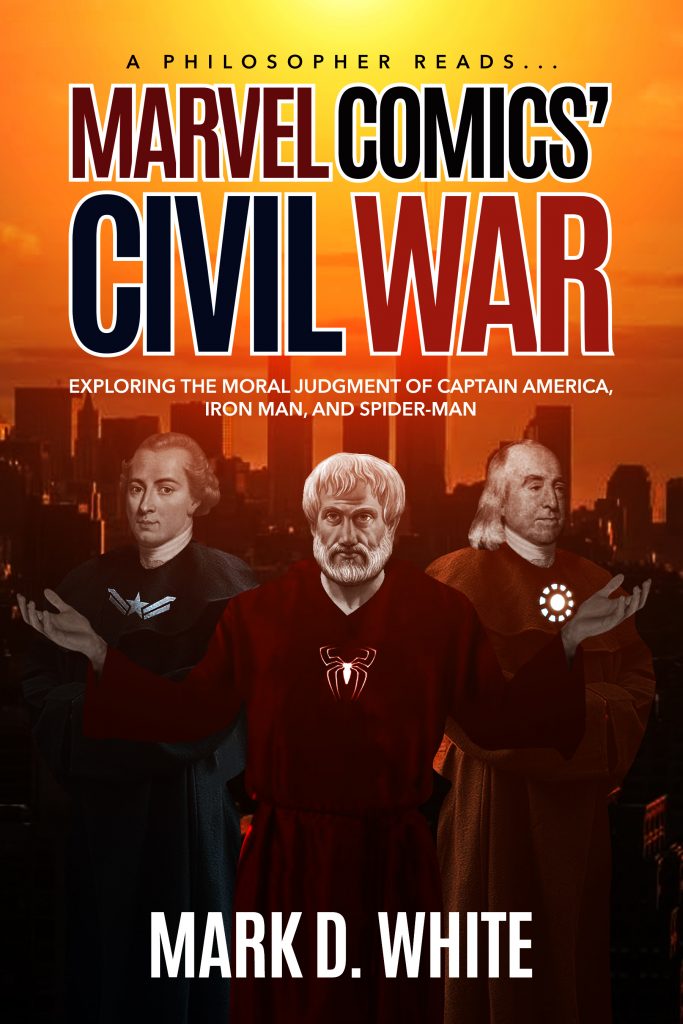 In your book A Philosopher Reads…Marvel Comics’ Civil War, which was based on the Civil War storyline in the comics rather than the film, you suggest that Iron Man is a utilitarian and Captain America is a deontologist. Do these categorizations hold in the film also? How?

I’m happy to say they do: while the details of the comics storyline were changed to fit the background of the Marvel Cinematic Universe, the motivations and positions of the two primary heroes involved in the conflict were the same, even down to dialogue that parallels that in the comics. Iron Man still sees the legislation as a net positive in terms of helping the public feel safer about their superpowered protectors, and works to ensure it works as well as possible to create the best outcome. Captain America still feels the government oversight limits the free action of heroes and ties their hands too tightly, although he is also concerned with heroes’ ability to respond quickly when they’re needed. In simple terms, then, Cap opposes Iron Man’s pursuit of the “good” and in favor of the “right.”

How does Marvel’s movie treatment of moral/political conflict compare to DC Comics’?

Coincidentally, the danger of unaccountable power in the hands of superheroes was at the center of both the big superhero films so far this year, DC/Warner’s Batman v Superman and Marvel’s Captain America: Civil War. While, from my point of view, both films could have spent more time discussing these issues, Civil War did a much better job of dealing with some of the nuanced aspects of the issues at its heart, as did its predecessor, Captain America: Winter Soldier (2014).  Batman v Superman merely glanced at them and then moved on, which was a missed opportunity from some depth sorely missing from that film.

You mentioned Captain America: Winter Soldier, which juxtaposed Cap’s principled, right-and-wrong mentality with the complexities of the surveillance state and political espionage.  How does Civil War continue exploring this theme or change the focus?

In general it continues this theme, but changes the focus from the more complex issue of government surveillance and pre-emptive law-enforcement to the simpler and vaguer one of government oversight, which itself seemed significantly milder than the legislation that inspired the Civil War in the comics. More interesting, though, is that in the new film, Captain America is facing not a tyrannical government bureaucrat but one of his closest friends and allies, Iron Man. This puts a more much human face on both sides of the ideological conflict, and transforms it from the usual story of good-versus-evil or right-versus-wrong to one of good-versus-right in which both sides have sound arguments behind them. Neither hero’s position is wrong or bad on the surface, although some of their actions in pursuit of their respective ideals become questionable.  This is an issue that emerged much more in the comics than in the film.

In previous Marvel Cinematic Universe installments we’ve seen a lot of focus on the metaphor of the shield versus the sword, or extraordinary powers being used either proactively or defensively.  In Avengers: Age of Ultron (2015), for instance, the character Tony Stark, aka Iron Man, developed the artificial intelligence program “Ultron” as a means of protecting against alien invasion, but in doing so, he unwittingly unleashed an existential threat to humanity.  How does the theme of pro-active use of powers versus re-active defense against threats play out in this installment?

It seems that, by the point we meet him in Civil War, Tony may have been humbled a bit, taking the Avengers’ responsibility for the collateral damage from their defensive efforts as well as the fallout of his own pre-emptive ones. And it takes a lot to humble Tony Stark! Perhaps it is this newfound humility, born of the realization that even he can’t predict the consequences of his own pro-active actions, such as Ultron, that makes him more open to the idea of government oversight, especially when he doesn’t have the opportunity to take charge of it as he did in the comics. In the comics, a similar humility comes from his own experience with alcoholism and irresponsible action while under the influence.

On the other hand, Captain America reacts to recent events differently, seeing both Tony Stark’s failed Ultron experiment and S.H.I.E.L.D.’s Project Insight program of pre-emptive policing as examples of the arrogance of unaccountable authority. One of the most important aspects of Captain America’s character is that over the years he has developed a strong distrust of authority, which is yet another reason that he opposes the government oversight that starts the conflict — he has no idea who is going to be giving the orders in any given situation or what their true motivations are.

How should non-superheroes, ordinary citizens, living in the world of this movie feel about the superheroes who battle in their midst? Is this narrative similar to the Greek literary tradition in which humans are unwitting bystanders in the squabbles between the Olympians?

The analogy to Greek myth is great, and I think that was certainly the implied attitude among the broader public in the background of Batman v Superman, which was presented as a battle between gods, far above the realm of mortal men and women. This is consistent with the more deified heroes of DC Comics, but in the Marvel Universe of both comics and film, the heroes have always been portrayed as more human and relatable, to readers as well as the broader public in the stories themselves. This perspective has been explored in comics such as Kurt Busiek and Alex Ross’ Marvels, which gives a normal person’s perspective on the Marvel Universe as superheroes began to emerge in the 1960s.

Clearly the public in the Marvel films does feel threatened to some degree by the actions of their superheroes, especially given recent tragedies resulting from them. But I think that proper analogy here is to police or military personnel, men and women who for the most part have the best of intentions but nonetheless make very human mistakes—mistakes for which, the public very reasonably believes, they should be held accountable, which leads to the call for oversight and regulation that gets the Civil War started.

Is there a philosophy that “wins” in the film?

In my opinion, no, and for that I’m grateful! In my book on Civil War, I try to make the point that both liberty and security are important values that may be in conflict logically but must be balanced in practice. The same goes for utilitarianism and deontology considered simply, both of which have shortcomings that demand more nuanced consideration which also brings them closer together. In the comics, where the creators had over a hundred issues to explore the nuances of Iron Man’s and Captain America’s positions, as opposed to two-and-a-half hours of a film, the drawbacks of each hero’s moral code was shown—drawbacks that were further emphasized through Spider-Man’s role as a moral barometer that pointed to each hero at various times throughout the story. Sadly, Spidey plays a much smaller role in the film. My book gave me a fantastic opportunity to explore all of this, drawing from years of comics preceding and following the Civil War; for Iron Man, in particular, the Civil War was just the beginning of a long character arc of failure, self-discovery, and redemption. Maybe we’ll see this in a future Iron Man movie if we’re lucky!

Mark D. White is Chair and Professor in the Department of Philosophy at the College of Staten Island /CUNY, where he teaches courses in philosophy, economics, and law. Find out more about Mark on his website here.  His Batman v Superman interview can be found here.

If you have a philosophical perspective on a film or book, we’d love to hear about it.  Contact us via the submission form here.

The Story of Romance

Committee on the Status of Women Sponsored Panels at Pacific APA