Black Issue in Philosophy: Understanding Togetherness in Difference in a Hateful World

“Wherever one thing stands,” Chinua Achebe (1989) argued, “something else must stand beside it,” because the world must necessarily be a shared space, one that is shared by different beings and forms of life. 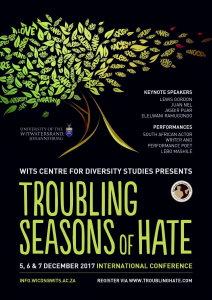 Possessed of a similar decolonial quest for what Melissa Steyn, the South African National Research Chair in Critical Diversity Studies,  has characterized as “being different together” in a diverse world, the Wits Centre for Diversity Studies (WICDS) at the University of the Witwatersrand in Johannesburg, South Africa, has for the past four years hosted international conferences that promote critical conversations in search of what decolonial thinkers such as Boaventura de Sousa Santos and Arturo Escobar have called a world in which other worlds are possible—an existential universe where human and epistemic diversity are received as liberatory opportunities rather than those for oppression and exploitation of the other.

In a forthcoming book, Sabelo Ndlovu-Gatsheni condemns a “world without others” as an oppressive universe where powerful and hegemonic individuals, groups, and organizations institute sameness as normative and criminalize both human and epistemic differences. A climate is produced where the different others—racially, sexually, bodily, culturally, religiously, and otherwise—are criminalized and punished.

This post seeks to give a helicopter view of a critical meeting of minds that WICDS occasioned in its recent international conference in December 2017. The theme of the conference—Troubling Seasons of Hate—signified both how hate as an exercise of toxic power troubles the world and also how scholars and activists can critically trouble its destructive power by advancing vigilant and militant critiques.

The conference was inspired or, more accurately, provoked, by the disturbing reality that, in the Euro-American powered world system, “It is becoming clear that we are in trouble. Humanity may be on the brink of repeating some of the most destructive and dehumanizing chapters of modern history as populist ethno-nationalism gains currency” (TSOH conference call).  The emergence of Donald Trump as President of the United States has given respectability and acceptability to some currents of contempt, notably toward the black, foreign, sexual, gender, and disabled others.

Dominant theories and concepts that have been prevalently deployed in understanding diversity have become exhausted, Melissa Steyn (Director of WICDS) contended in greeting the delegates to the three day conference. She asked for an urgent critical inquiry into the everyday, seemingly mundane and banal acts of othering, some of which are expressed as jokes and passing trivia but go far to normalize oppression and the logics that permit destructive behaviours toward others.

In opening the conference, Tawana Kupe, the Vice Principal of Wits University, noted, amongst other provocative remarks, that hate is constructed and carried by human beings, who are the creatures that have the agency to deconstruct hate in its different phases and facets. In other words, the human normalization and naturalization of small and large scale forms of hate is itself a stubborn but real construction that needs to be challenged if hate is to be troubled.

The first keynote speaker to address the conference, Jasbir Puar (Rutgers University), deposited the view that oppression can be fluid and smoky in that the very resistance to hate can produce its own fundamentalisms that are oppressive. Artisanally, Puar distinguished disability, as a constructed identity, from “debility,” which she linked to biopolitics. The control and domination of bodies and populations of oppressed peoples exercises a form of toxic power that feeds from creating incapacity and inability for marginal bodies. Puar used the example of the people of Palestine, who are effectively debilitated and systematically disabled in several networked ways in the present world order.

The second keynote speaker Elelwani Ramugondo (University of Cape Town) argued that language and representation at large may seem to be neutral and innocent, but the line between a joke and an insult is not only thin but also depends on the experience and condition of those that are powerless and at the receiving ends of power. What power laughs about, that is, may be insulting to its victims. Jokes of power get experienced as curses by the powerless; distributions and circulations of humor and profanity are not insulated from power relations. That being the case, Ramugondo noted, oppressed peoples can in return critically deploy jokes and humor to rebuke power and domination and to illuminate the workings of privilege and strip it of its masks. The myth and humor of the oppressed is employable in troubling power and its accompanying privilege.

The Afrikana existential philosopher, Lewis R. Gordon (University of Connecticut, USA; Global Center for Advanced Studies; Rhodes University, South Africa) opened his keynote address with the remark that those that do not understand ancestors will not understand descendants. In that pithy statement, Gordon gave body to the idea that the earth should be occupied, utilized, and kept responsibly as it is a heritage from ancestors and a debt to descendants of the future. At once, the gratitude that we must have to the ancestors for the world and life is also our ethical responsibility and existential duty to deserving descendants that must inherit a hospitable world from us. Power does not only produce goods, privileges, and luxuries but also also emits licenses that can enable excesses of oppression and domination.  Gordon’s philosophy is located in the worlds and experiences of black Africans in the mainland and the diaspora, and it begins from the thought of those peoples of the world whose very humanity has been questioned and whose ability to think is often held suspect in a world enveloped in Eurocentricism. The idea that a tiny population of white peoples used power, privilege, and presumed license to position itself as a representative of the entire human species is found to be colonially criminal by Gordon, whose persuasions to liberation and humanization are celebrated in the global decolonial network.

Lewis Gordon attended several parallel sessions in addition to presenting his keynote.  “Those sessions were excellent,” he said. “They were thought-provoking, informative, and well-researched.  For instance, the session on identity and belonging was superb, with Lawrence Ugwuany’s nuanced discussion of difference and otherness and Antje Schuhmann’s on feminationalism among the New Right.” About another session, Gordon remarked that “The one on sex workers, marked by Nosiipho Vidima’s and Marlise Richter’s poignant, erudite presentations, stands among the best I’ve encountered on the subject.  As well, the many coffee and lunch conversations brought the conferring and dialogue elements of the conference’s themes to the fore.  This work must continue.”

Professor Juan Nel (University of South Africa) reported on the findings of the Hate and Bias Crime Monitoring Project, which is based on data gathered in SA from 2010 to 2014.   The data included a range of hate speech from defamation of character and harm to character to harassment and intimidation, as well as crimes such as arson, blackmail, rape, and illegal eviction. The findings showed that hate crimes often affect surviving victims on multiple levels, impinging on their ability to function normally and contribute meaningfully to society.

Among the recommendations of the Hate and Bias Crime Monitoring report are that discourses within communities need to be disrupted. This recommendation links to another project that WICDS is embarking on, which engages with Bystander behaviors.  The training of service providers and ensuring accountability of authority figures and skilled professionals when dealing with hate crimes is essential.

After the conference, Paul Chappell, a researcher at WICDS reflected that it is remarkable how “a number of keynote speakers and other presenters, throughout the conference, paid attention to the complexities of disability in the context of hate.” Jamil Khan felt that the conference “was a real opportunity to rethink society” as “hate has become a taken for granted part of society, with some of it appearing innocently as day to day talk and practices.”

Critical reactions and responses to the keynotes and conversation of the three day conference led to interesting suggestions on the need for wider and deeper networking amongst scholars, students, and activists. Pursuant to the interrogation of the troubling and also troubled current of hate at a world scale, WICDS plans an even bigger international conference in 2018 on the theme of Re-imagining Liberation: Institutionalised despair/Critical Hope.  Members of the WICDS hope it will open more vistas in the understanding of difference in a world marked by powerfully punitive othering.

From the gesture of WICDS and its critical projects, hate on its own and coloniality at large are not having an uninterrupted march in the world.  Critique and its accompanying activisms are mounting due protest, resistance, and proposing another world where diversity, plurality, and multiplicity are a human opportunity.

Dr. William Mpofu is a researcher at the Wits Centre for Diversity Studies at the University of the Witwatersrand, Johannesburg, South Africa.

Ndlovu-Gatsheni, S. 2016. A World without Others. Unpublished Book Manuscript.

Gender Is the Philosophical Issue of Our Age