W. Julian Korab-Karpowicz received his doctorate at the University of Oxford and is currently professor at Zayed University in Dubai. In the early 1980s, he was a student leader in the Solidarity movement, and in 1991 was elected Deputy Mayor of Gdansk. He was also a diplomat and an ethics expert of the European Commission. He is the author of several books, including On the History of Political Philosophy: Great Political Thinkers from Thucydides to Locke (Pearson/Routledge 2012/2016), The Presocratics in the Thought of Martin Heidegger (Peter Lang 2017) and Tractatus Politico-Philosophicus: New Directions for the Future Development of Humankind (Routledge 2017).

You were initially studying electronics engineering at the Gdansk Technical University. What brought you to philosophy?

It is often that initially we follow our parents. My father was an engineer and inventor, and studying advanced technologies was fashionable in the times of my youth, as it is still today, and this explains why I initially went into electronics. But after three years, I realized that I was missing something. There were some questions that would emerge in my mind that engineering could not answer. These were questions about reality. First, I started to ask myself whether the socio-political reality of the “real socialism” in which I was growing up, was indeed a perfect one, as we were all told. Second, I started to wonder whether there is something beyond the visible reality of facts, something or perhaps no longer a thing, that I describe as the “Mystery of Existence” — the Mystery which would open to a religious mind, but which could possibly be also approached in a rational way. This made me decide that I should also study philosophy.

How was studying philosophy helpful to your work on this?

After completing a degree in engineering, I went to an intellectually and politically vibrant place, which was at that time the Catholic University of Lublin. While working at the University’s Computing Center and pursuing my philosophical studies, I found certain answers to my questions that inspired me to become politically active. I became a leader in the Independent Students’ Association. Lublin and Gdansk were the key places to initiate Poland’s Solidarity revolution of 1980, which eventually spread to other countries and resulted in the fall of the Berlin wall in 1989, an event I personally witnessed. But before this happened — because of the martial law that was imposed in Poland in December 1981 — I could no longer stay in my country. My Odyssey started. I went to Canada to eventually become a Canadian citizen, studied philosophy at the University of British Columbia in Vancouver, and then because of my disillusionment with analytic philosophy, continued my graduate studies at The Catholic University of America in Washington, DC and at the University of Oxford. At that time, I perhaps did not yet unveil the Mystery of Existence, but all these experiences strengthened my conviction that moving to philosophy was a right choice.

What is philosophy for you?

I understand philosophy in the classical sense as Love of Wisdom. We find Wisdom in the universe and as we progress as humankind this Wisdom is gradually unveiled to us. It is revealed in scientific laws. However, Wisdom goes beyond scientific knowledge and technical know-how. It is also the capacity to recognize and understand values in life. It is disclosed in values and moral norms that we are capable to discover and practically implement in our societies. But we should never claim to have full Wisdom, neither in science nor in the way we organize our social life, because we are not perfect beings and our lives are always a journey of learning through trial and error. Wisdom, understood as the perfect and holistic knowledge of the whole, does not belong to us. Science is only a partial knowledge of a part. Those who claim to possess full Wisdom in social and political affairs arrive in the end at various destructive ideologies. A distinctive feature of our modern and postmodern times is in fact the presence of ideologies, from left- to right-wing. Therefore, as philosophers, we should always try to free ourselves from any ideology. We should aim at perfect knowledge of the whole, but at the same time we should be aware of our intellectual limitations. Ultimately, this is not only the goal of philosophers, but also of the whole humanity: moral and intellectual perfection. As we strive for our own perfection, but at the same time give guidance to others, we as philosophers become true leaders of humanity, and hence, philosophy, correctly understood, is the most fundamental and most strategic of all disciplines. Philosophical (as well as religious) ideas influence how people think and, with their ideas, philosophers lead humanity in certain directions.

In which direction do you think philosophers should lead humanity?

First, in my Tractatus Politico-Philosophicus, I defend the possibility of speaking meaningfully about values against Wittgenstein and his positivist followers. My book attempts to prove that the world created by human beings is primarily a world of values, ​that ethics can be expressed with sense and is not merely an expression of feeling or preferences, and that rational political thinking about a good life is possible. Second, I ask the question of happiness, which I define as self-realization and relate to our life purpose. I claim that “we were not born here on Earth to become consumers or militants.”  In order to repair our current world condition, we must, first of all, ask the question of the Mystery of Existence, recognize our true human identity and our destiny as humankind. Power is not the proper goal. The true end of humankind is not for any single nation, religion, ideology, or political or economic system to overcome all the rest and affirm its unchallenged world domination. We have a higher task to be completed. We are vehicles of the evolution of the universe. In this phase, evolution is no longer merely related to the transformation of matter or the biological improvement of bodies but proceeds through the development of our minds, as it is expressed in our brilliant scientific and technological achievements. However, the expansion of scientific knowledge is not enough if ethics is lacking. Therefore, to continue with our evolution, we need to become spiritually transformed. We must recognize the futility and extreme danger of today’s political struggles and rediscover our true goal, which is moral and intellectual perfection. The precondition for this is, as I advise in my Tractatus Politico-Philosophicus, to depart from the conflicts that are tearing the world and proceed by the way of cooperation. As we move from conflict to cooperation, we leave behind the conflicting times of modernity and postmodernity and arrive at a new era — that of evolutionity. As I state in my Tractatus,

The purpose of the evolution of life is its fullness and perfection. Human evolution is a journey to ever greater freedom, and moral and intellectual perfection. 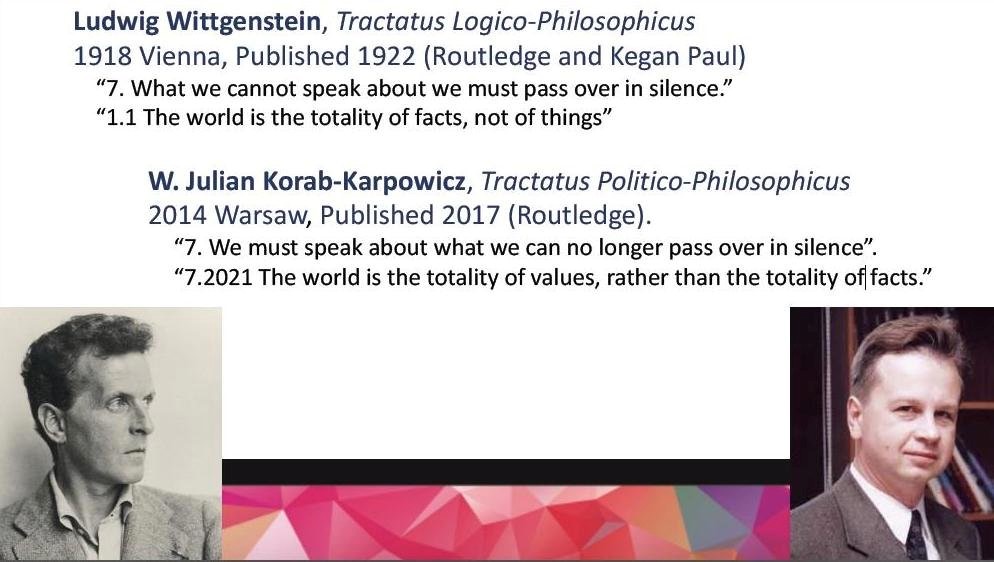