Qrescent Mason presented a paper for the U.S. Midwest Society for Women in Philosophy (SWIP) session at the APA Central Division Meeting in March 2017 in Kansas City.  Here she shares some insights into her thinking about affirmative consent and the session.

Qrescent, what was the focus of your paper?

The focus of my paper was on the notion of Affirmative Consent for on-campus sexual assault cases. I argued for an “ethics of affirmation,” using Simone de Beauvoir’s long essay, Must We Burn Sade.  In this, I wanted to suggest that Affirmative Consent not only be adopted as an on-campus policy, but also for how an ethics of affirmation in sexual relations could be considered useful and important for all of us.

What do you think were the most interesting or contentious points that came up during the session?

The most contentious point during our panel seemed to be in response to Amber Rose Carlson’s suggestion, in her paper, that the possibility of transformation does not give adequate justification for why rapists should not be more harshly punished in the criminal justice system. There seemed to be a lot of debate around this with the audience and panel members who had differing insights on the possibility for human change and transformation.

In what ways do you hope this sort of research will inform public discourse and debates?

I think the research done by all three of the panelists for the Midwest SWIP session are absolutely essential to public discourse. Although it initially seemed that our papers were not connected, after we presented them, we realized that we were exploring similar questions of subjectivity and sexuality, all through slightly different lenses. I think having trained philosophical eyes on such matters–sexual assault, both in the on-campus and interpersonal context and the acknowledgment of others as subjects–are topics that are foundational to women’s experiences in the world. As such, I hope that, both for the panelists and for those who attended as audience members, we can take some of these ideas and apply them to our teaching and to our social experiences.

One of the things I really enjoyed most of all was talking to Zoey Ockenden (another panelist) about the need for philosophy to be constructive, instead of deconstructive. My sense is that there is a feeling of urgency–especially among feminist philosophers and scholars–to want to make use of philosophy and share the gifts of philosophy with the larger world in order to affect some kind of very necessary changes in the world at large. I think this impulse–to think more closely about constructive ways of doing philosophy–makes me feel both excited and hopeful about continuing to do work within philosophy, in settings such as the Central APA, and outside of philosophy in my social and political circles. 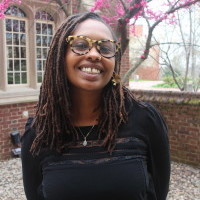 Dr. Qrescent Mali Mason is an Assistant Professor of Women’s and Gender Studies at Berea College in Berea, Kentucky. Her research focuses on ethics, Black feminist philosophy, and feminist autobiography and she engages these areas of research primarily through the works of Simone de Beauvoir, Audre Lorde, and bell hooks.

The Illusion of Sense (IAI video)