Academic Placement Data and Analysis: An Update with a Focus on Gender

Since 2015, we have taken part in a project that collects and analyzes placement data for doctoral graduates in philosophy, with funding provided by the small grants fund of the American Philosophical Association (APA). Philosophy has several qualities that make it a good discipline for such a project:

This last feature is the focus of this post. In 2015, the project developed a website and database to help keep track of this data, as well as launching a successful data-gathering campaign. We found that women who graduated between 2012 and 2014 were more likely than men to have a permanent academic placement within two years of graduation, a finding that we intend to explore further. So far in 2016, we have released an update to the 2015 report, including data on 2015 graduates and a more finely-grained set of analyses. Some of the effects that were significant in our original analysis were not significant in these new analyses, including the gender effect. For that reason, we decided to release a new set of analyses and results, with approximately the same structure of those released in August 2015. These updated results include the new data from 2015 as well as improved data for previous years (see below). Before discussing these results, here are two other ongoing Academic Placement Data and Analysis (APDA) projects, along with a data gathering form:

Please feel free to send the form to past philosophy graduates you know who may want to be included. And without further ado, here are the new results (with methods posted here):

For this analysis, only cases receiving doctorates between 2012 and 2015 were included. There were 1,187 men and 466 women across 127 programs. The number of men and women and the number in each first-reported  area of specialization (AOS) category by placement type are provided in Table 1 below. (See also Tables 2 and 3 here.)

Notes: LEMM – Language, Epistemology, Metaphysics, and Mind; SLM – Science, Logic, and Math. Columns do not total to the entire sample size as they do not incorporate missing data.

An Overview of the Results

While in the 2016 report analyses drew comparisons between and across all placement types, in the 2015 and present analyses, permanent academic placements were contrasted with the set of all other types of placements. Out of a total of 1,185 individuals, most were not placed in permanent academic positions within two years of graduation, and more men than women were placed in such positions. (See Figure 1 below). 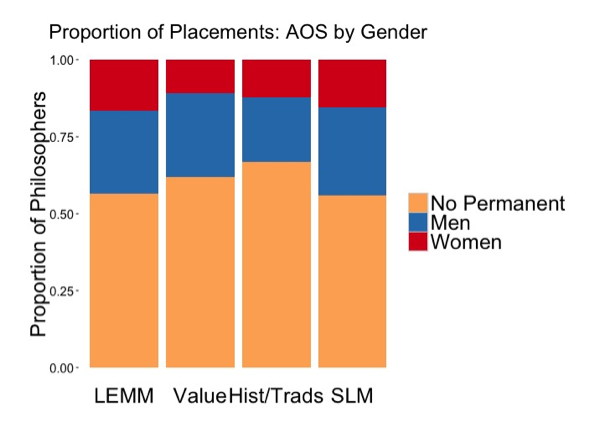 Figure 1: The proportion of individuals who were not placed within 2 years into a permanent academic job as well as the proportion of those placed who were women and men. 472 were removed for NA values in either Gender, AOS or Permanent Placement (i.e. year of permanent placement is unknown).

Although more men than women were placed in permanent academic positions within two years of graduation, it is estimated that women have a 0.50 unit increase in the expected log odds of finding such placement. Many prefer to view this in terms of odds ratios. In terms of odd ratios, our findings (in Table 4 here) show the following: 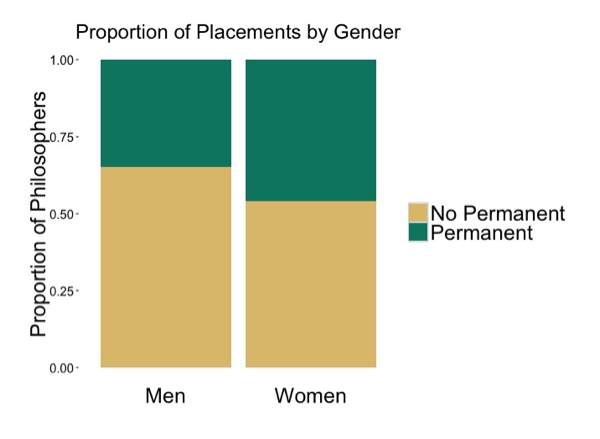 Figure 2: The proportion of placements by Gender for graduates 2012-2015. It shows that a higher proportion of women are placed in permanent positions within two years of graduation than men. Of 1,657 individuals, 46 were removed for NA values in either Placement or Gender (NA value in placement means that permanent placement was obtained but the year of that placement is unknown).

We have two hypotheses regarding this result that we hope to explore:

Another possibility is that women philosophy graduates are more likely to find permanent academic placements because hiring programs have a preference for hiring women, all else being equal. This hypothesis has found some support in STEM fields. We do not now have plans to test this hypothesis, but could attempt in future to gather information from graduates relevant to hiring, such as publication and teaching records.

Supplementary materials and methods for this post can be found here.

Current project personnel include Carolyn Dicey Jennings, who leads the project; Angelo Kyrilov of Electrical Engineering and Computer Science and Bryan Kerster of Cognitive and Information Sciences, who work on database development and interface; Patrice Cobb of Psychological Sciences, who works on statistical analyses; Chelsea Gordon, Samuel Spevack, and David Vinson of Cognitive and Information Sciences, who work on the qualitative survey and linguistic analyses; Justin Vlasits of Philosophy at UC Berkeley, who serves primarily as an advisor; and Evette Montes, who is an undergraduate research assistant. Your feedback is welcome! You can contact us at the project email account: apda@ucmerced.edu or in the comments below.

What is evil? (Video)