The APA grant funded Fiction Writing for Philosophers Workshop was held at Oxford Brookes University on June 1-2, 2017.  It was organized by Helen De Cruz, and featured presentations and mentoring sessions with philosophical fiction writers including Sara Uckelman (Durham University) Eric Schwitzgebel (University of California Riverside), and the British novelist and screenwriter with a Ph.D. in Nietzsche and Kafka James Hawes (Oxford Brookes University).  I attended the workshop and here I share some of Hawes’ tips for creative writing.

The philosophers sat in the bright newly-built classroom, eyes fired up with curiosity and caffeine, and pens hovering above their notebooks.  The automatic windows purred in the background to filter the rising temperatures as the unusually sunny weather streamed in.  Up front stood Dr. James Hawes, author of six novels – two of which have been adapted for the big screen and one for a BBC documentary.

“Forget about the plot!” Hawes declared, “What’s your governing idea?” We should be able to summarize every story in eight words or less, he explained, and this central idea about people in the landscape of a story – not the plot – is what will hold a story together.

Teaching a room full of philosophers about rules is a task fraught with danger and it wasn’t long before participants challenged Hawes, starting with the importance of the plot.  Hawes argued that in a show such as Hinterland – a TV cop show set in Wales – no one cares that it’s ridiculous that there’s a murder in a small town every single week; viewers care about the main character.  Plot is only a means to get characters into a situation of stress and choice.  Below are more of James Hawes’ top tips for aspiring fiction writers.

The writing activity that Hawes asked participants to do was to use Ernest Hemingway’s method in the introduction to For Whom The Bell Tolls to write an introduction to a story of our own. 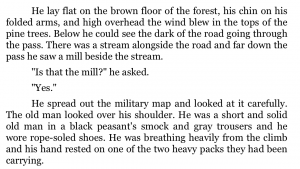 Hemingway’s introduction places the character in a specific context.  It provides vivid details about the scene.  It gives clues that the main character is on a mission, but we don’t yet know for what, which makes it intriguing.  It doesn’t open with dialogue.  Only after the scene is set does the main character ask a question.

While the philosophers afterwards discovered a widespread mutual dislike of Hemingway, it’s hard to argue about a book that was nominated for a Pulitzer Prize.  And whether you agree with rules or not, Sara Uckelman reminded us of Picasso’s wise words:

More about James Hawes and his work can be found here.

Hearts and Minds: Are feelings a truer guide to reality?

Knowing Others and Knowing Oneself